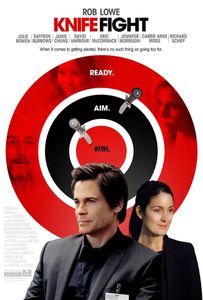 (On Cable TV, July 2015) As a political junkie, campaign strategist is high on the list of dream jobs I’ll never have –but Knife Fight is good enough to make me live the experience vicariously.  Starring Rob Lowe as an expect fixer working for political campaigns, Knife Fight delves deep into the dirty tricks deployed to make sure that “the right guy” wins.  Interestingly, this does comes with a bit of soul-searching about what “the right guy” means and whether there’s a correlation between being a good leader and a fallible human being.  Knife Fight certainly isn’t a perfect film (its chronology is a bit strange, it doesn’t delve quite long enough in the dark side of the dirty tricks, practically repeats itself at times, and gives short thrift to a few characters), but it’s unusual in that it’s co-written by an actual campaign consultant and so has more than a whiff of authenticity to it.  Other than Lowe, who’s clearly having fun, the film does have a few likable performances by Jamie Chung as a budding strategist and Carrie-Anne Moss as an improbable gubernatorial candidate.  Knife Fight will most directly appear to left-leaning political junkies with its mixture of behind-the-scenes manipulation, wry humor and satire.  It’s an enjoyable comedy in a very specific mold, and all the better for it.