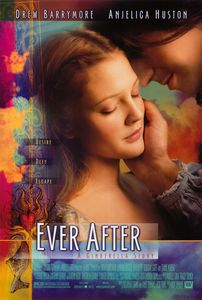 (On TV, December 2015)  Everyone’s got irrational dislikes for particular actors, and one of mine is Drew Barrymore.  I can’t explain it, shouldn’t proclaim it but won’t try to hide it.  While I can actually name a few movies of hers that I like (including a few in which she played a central role, such as the Charlie’s Angels films) and find that I’m disliking her less and less lately, EverAfter has taught me that my dislike of her in earlier roles remains real: Her turn as the protagonist of this reality-based take on the Cinderella fairy tale left me cold and wishing that just about any other age-appropriate actress could have taken the role.  It doesn’t help that the film itself feels so dull: Being quite familiar with the Cinderella story beat by virtue of having a young daughter, I find that any attempt to take supernatural elements out of the story makes it far less interesting.  Here, the insistence to “keep it real” by setting it in medieval France feels as if it’s holding the film back, especially when adding Leonardo da Vinci as a character makes a mockery of the whole realism thing.  Hammering modern social notions into that framework also feels beside the point, adding to the increasing lack of interest in the film as it rolls along.  Now that I think of it, you can add “making fairy tales gritty and realistic” to the list of my pet irrational dislikes: it doesn’t add much, takes a way of lot of potential greatness and misses the point of the fairy tales.  EverAfter feels rote, especially after the recent slew of revisionist takes on other classic fairy tales.  At this point, I can’t help but compare it to the live-action Disney remake of Cinderella and find it severely lacking in the wow department.  But, as they say, your mileage may vary… especially if you don’t quite have the same irrational dislikes as I do.