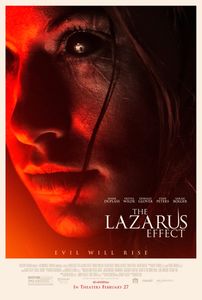 (On Cable TV, December 2015) Sometimes, it’s tempting to go back in time, grab a particular filmmaker by the shoulder and say “This project you’re thinking about?  Forget it.  It’s not worth it.”  Why anyone would want to make another movie about scientists finding ways to bring back the dead to life is beyond me: it’s not as if we don’t know what’s coming, and Flatliners still looms large as the flawed but definitive statement in this area.  I’m sure that there’s something interesting left to say about resurrection and demonic possession, but The Lazarus Effect is not the film that will achieve that: It’s exceptionally formulaic, uninterested in any kind of rigor and not particularly well-executed on a moment-to-moment basis.  There are no surprises and almost nothing to look forward to.  At best, there’s something to be said about seeing young capable actors such as Olivia Wilde and Donald Glover; alas, they are stuck in a basement-grade horror movie of the kind most often seen as filler on cable TV late-night schedules.  The plot is pointlessly dull, with its most promising edges shaved away to irrelevance by the end of the film.  There’s something particularly exasperating in the way the resurrected (predictably) turns evil, but also comes back with telepathy, telekinesis, super-strength and whatever other unfair advantages a psycho-killer possessed by a demon may have.  The Lazarus Effect is just not very interesting, and feels too long even under 90 minutes.  If it wasn’t worth making, it’s certainly not worth watching.