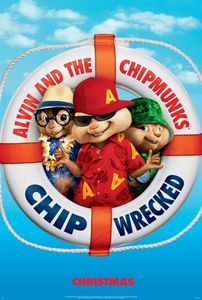 (Video on Demand, July 2016) As a parent, you get to see the weirdest things, and I’m being completely honest when I say that Alvin and the Chipmunks: Chipwrecked was nowhere my radar of things to watch. But daddy proposes and kitty decides, so that explains what I’m doing watching animated chipmunks sing to popular songs while landing on a deserted island. What’s even less probable is that I ended up enjoying myself. Oh, this isn’t particularly sophisticated filmmaking or even particularly refined comedy. The film is for kids, the jokes are obvious, the actors taken pleasure in hamming it up (with particular props to David Cross as a Chipmunks-hating antagonist and Jenny Slate as a castaway steadily getting crazier as the film advances. I knew practically nothing of the series beyond gagging at the trailers for the first two movies, but it’s not hard to quickly pick up on the basics. The rest is too cute to be angry, as the CGI animals blend with the otherwise live-action movie. (As noted elsewhere, this is practically a subgenre by now.) There are enough chuckles here to make the experience enjoyable by adults, and the bouncy musical numbers (including a predictable final rendition of “Survivor”) will keep the kids hopping. Alvin and the Chipmunks: Chipwrecked is a cartoon, it’s fun and it’s not entirely insulting. My standards for kids’ movies are age-appropriate.