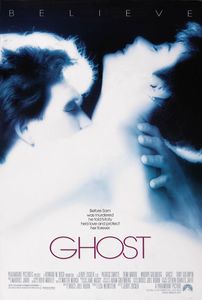 (On Cable TV, June 2016) There’s no denying that Ghost has ascended to the film pantheon as a romantic fantasy film (cue the pottery sequence!) but a fresh viewing shows that the film is a bit more than that: Beyond the romance, it’s got strong comic moments, a decent amount of imaginative flair and quite a few thrills. Anchored by Patrick Swayze’s fair performance and bolstered by a surprisingly funny and good-looking Whoopi Goldberg, Ghost is more interesting when it deals with the mechanics and complications of a ghost trying to make contact with the living. Suspense elements are woven (not always seamlessly) with comic sequences, giving the film a multifaceted appeal that doesn’t quite degenerate into abrupt tonal shifts. Demi Moore is a bit generic and baby-faced Tony Goldwyn is more fascinating than anything else considering how well he has aged in Scandal. Still, the film holds up relatively well beyond the pottery sequence, hitting marks on a wide spectrum of targets. It’s enough to make anyone wonder if today’s blockbusters have grown a bit too selective in their intentions for fear of tonal incongruity. Ghost, at least, deftly goes from romance to comedy to horror to thrills, and the result still speaks for itself.