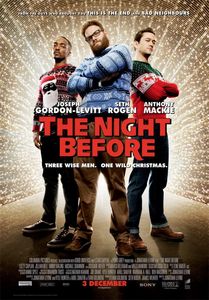 (On Cable TV, July 2016) By this time in his career, Seth Roger has such a defined persona that “Seth Rogen does a Christmas movie” is enough to suggest a fairly accurate picture of The Night Before. We’re going to see crudeness (especially penile jokes), copious drug use, dumb jokes, a paean to male friendship and some anxiety about (finally) growing up. Roughly half of Rogen’s movies in the past ten years have played variations on the same themes and this latest one isn’t any different. For all of the emotional scaffolding about three friends wondering whether their Christmas traditions are holding them together or holding them back, this is really an excuse for Christmas-themed drug jokes and assorted shenanigans. It does work reasonably well, but usually thanks to the actors more than the jokes themselves. Joseph Gordon Lewitt, Anthony Mackie, Lizzy Caplan, Michael Shannon, and, yes, Seth Rogen all bring something extra to their roles even when they’re just doing what they usually do best. (Well, that’s not exactly true for Michael Shannon, who seems to be enjoying himself in a coarser role than usual.) Mindy Kaling, Ilana Glazer, James Franco and Miley Cyrus also show up in small but striking roles. Some of the comic set-pieces work well enough, and the film’s conclusion is just as gooey-reassuring as we’d like in a Christmas movie. As far as holiday classic go, The Night Before aspires to a place alongside Harold and Kumar’s 3D Christmas and Bad Santa, which isn’t terrible company when the syrupy nature of year-end celebrations becomes a bit too much to bear. “Seth Rogen does Christmas movie” it is, then.