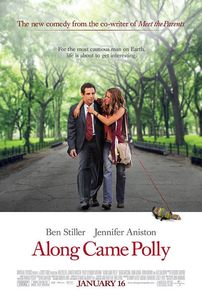 (On TV, September 2016) There is little worth remembering about Along Came Polly, a wholly mediocre romantic comedy that deals limply with well-worn themes. Ben Stiller stars as an insurance analyst who gets to pick between two women (Debra Messing and Jennifer Aniston), weighing risks and betrayals in his decision. In other hands, this may have been better. But as shown on-screen, Along Came Polly struggles for laughs, barely tries for romance and suffers from Aniston’s charismatic blank. Stiller isn’t given much to do with a low-intensity take on his usual persona (although he gamely gets a great samba sequence), while Aniston is blander than beige in a character that’s supposed to incarnate risk itself. Bad casting choice—even swapping Messing and Aniston’s roles would have done wonders. The film’s problems, in a nutshell, can also be seen in Alec Baldwin’s wannabe-offensive boss character: He’s supposed to be off the wall, but the film can barely make him feel eccentric. Along Came Polly often goes for gross-out humour yet can’t even manage a yawn. And so it goes, with good actors wasted in dull turns (including Kevin Hart in a pre-stardom tertiary role) in a film that’s almost entirely generic.