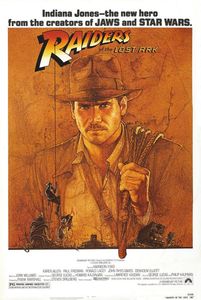 (Third or fourth viewing, On TV, September 2016) What a movie! I probably saw it more than twice before I started keeping online reviews in 1997, but it had been so long that I almost rediscovered the film in watching it again. It hasn’t aged much: while some of the special effects now look charmingly quaint, the pacing, shot construction, acting performances and overall sense of fun remains timeless. Harrison Ford has one of his career-best roles here, and Karen Allen is simply fantastic as Marion. Steven Spielberg directs the film with uncanny precision, and much of the practical effects are still convincing today. The use of Nazis as antagonists is guilt-free, while the mystical overtones of the story perfectly complete it rather than confuse it. Even looking at the film through the now-familiar Protagonist Redundancy Paradox (i.e.; Does Indiana Jones actually change anything through his actions?) doesn’t take away any of the thrills of the results. I’ve been revisiting a number of classic movies lately, and most of the time the reassessment isn’t kind. But with Raiders of the Lost Ark, I’m just as thrilled now as I was when I first saw the movie as a kid. What a movie!