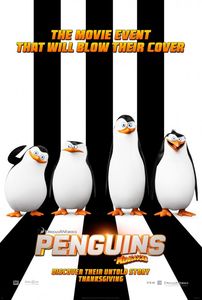 (Netflix Streaming, September 2016) There was a definite danger that a spin-off movie focusing on the best bit players of the Madagascar series would overexpose them, but Penguins of Madagascar surprisingly doesn’t run its subject entirely into the ground. Sure, they’re fleshed-out, lessened by their explained history, brought down by lame moments and not quite as cool over 90+ minutes than in small sketches within a longer movie, but these penguins come out of their showcase more or less as enjoyable as they were before the film, and that’s not bad. It helps that Penguins of Madagascar has a few great moments to even out the lengthier sequences. Particular note should be made about That One Continuous Shot in which the penguins jump, run and parachute down to Earth through a plane and other assorted debris. Otherwise, Skipper remains the rough voice of aggressive action, the other penguins respond ably, the film amuses itself by showcasing other animal covert agents and the action moves briskly across the globe. Only the villain seems weaker—with conflicting morals, not-cute aesthetics and a somewhat ineffectual plan, it takes a while to warm up to him, and even then not completely. Still, as an animated movie for kids, Penguins of Madagascar hits its expected targets in a frantic display of action sequences and the result is in-line with the Madagascar series so far. It could have been much, much worse, along the lines of the immediately forgettable Puss in Boots spin-off.