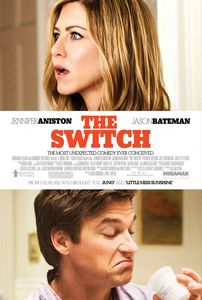 (On TV, October 2016) Although presented as a mostly-innocuous romantic comedy (by definition, almost every film featuring Jennifer Aniston is bound to be innocuous), there is a troubling streak to The Switch’s titular premise (which has to do with, ah, mislabelled insemination) that makes the film challenging to enjoy on the level at which it’s offered. By the time the paternity issues are matched with the weighty passage of years, The Switch becomes far more unsettling than your average rom-com. It still manages to work, largely because of Jason Bateman’s blend of sympathy and antisocial faults. (I used to think of him as a likable straight man in his immediate post-Arrested Development film career, but if you look carefully at his roles since then, his persona has developed this growing streak of repellent behaviour—in other words, he’s become a credible bastard.) Meanwhile, Aniston’s persona seems to be a prisoner of the film’s plot twists—much like her character. Jeff Goldblum does show up periodically as a sympathetic boss, while Juliette Lewis continues to prove that she’s often best used in small comic roles. The Switch does end rather well, but there are a few squirm-inducing moments along the way, and the result may be more sombre than anyone expected.