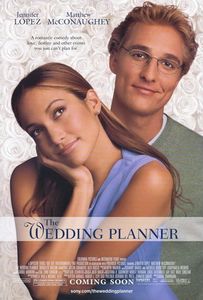 (On Cable TV, March 2017) It’s sad when capable actors are stuck with dull material, and The Wedding Planner is a case study in how that happens. Here, the always-appealing Jennifer Lopez and Matthew McConaughey (in the early rom-com phase of his career) do their best with a script that combines dumb situations with uninspiring dialogue. Their natural charm (plus good contributions from the always-interesting Judy Greer and Justin Chambers) is just about the only thing that keep the film together as it moves through the usual story beats of the romantic comedy formula. The first half-hour is quite a bit better (as in; interesting, less predictable, quirkier, looser, hotter) than anything that follows—it eventually becomes a romantic comedy so cynical that it practically forgets about the romance, so preoccupied it is with ritually moving its plot pieces through the expected episodes leading to the climax. The Wedding Planner is not much of a comedy and it’s not much of a romance either—at best, it does the strict minimum, lets its stars carry the film and calls it a day. Too bad.