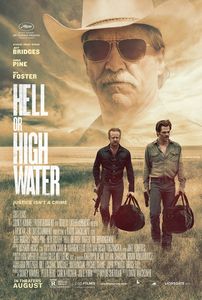 (Netflix Streaming, May 2017) It says much about today’s Hollywood that we’ve come to crave solid crime thrillers as an alternative to the usually undistinguishable dreck that has come to dominate multiplexes. Hell or High Water is a throwback to the time when this kind of crime drama, solidly acted, put together with skill, eschewing formula and taking on social issues, was a fixture rather than an exception. Here, Chris Pine and Ben Foster star as brothers trying to stop a bank’s takeover of their family farm by robbing branches of that very same bank. The populist anger runs raw in this film, which only heightens the drama when an affable veteran policeman (Jeff Bridges, gritty as ever) chases them across the state. The result is very much like a modern western, with SUVs replacing horses as our antiheroes go rob banks in small cities. It’s a solid script by Taylor Sheridan (who’s improving from movie to movie), and David Mackenzie’s direction effectively manages to portray East Texas in a credible fashion. It’s also, refreshingly, a movie that cares for even its minor characters: There are two waitress characters in the film, for instance, and both of them (Katy Mixon and Margaret Bowman) get a few memorable moments well beyond the usual “here’s your food, sweetheart”. There are no clear good or bad guys here, as viewers’ loyalties are tested and the film refuses a conventionally uplifting resolution. This being said, Hell or High Water does ends leaving a sense of satisfaction at the way the story is wrapped up, having taken us on a ride unlike most other big-budget movies out there. As a standalone movie, it’s crunchy good viewing. As an antidote to the current Hollywood orthodoxy, though, it’s nothing short of delicious.