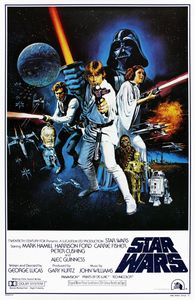 (Seventh or eighth viewing, On Blu-ray, May 2017) Well, well, well… Star Wars. The original. A fixture of my childhood, to the point where I long thought of the movie as review-proof: what would I possibly say about a film I watched every time it played on TV when I was a boy? I last saw it in theatres when it was re-released in 1997, and before then in the mid-nineties in a campus theatre with a bunch of animation students enthusiastic about the 1993 Definitive collection laserdisc, and before that nearly every broadcast on Radio Canada… But as I sat down to celebrate the 40th anniversary “May the Fourth” to watch the latest 2011 Blu-ray release of the 1977 film, I realized that there is, actually, quite a bit to say about Star Wars from a critical perspective. I’m not seven anymore, and the flaws of the film are more glaring than I expected. The story is simplistic. George Lucas’s dialogue, other than some oft-quoted lines, is frankly terrible. Carrie Fisher, Mark Hamill and Harrison Ford have charm, but they were not gifted actors at the time (they got better, or more accurately grew more comfortable with their chosen screen persona). The universe is bare-bones and at time nonsensical. The special effects are all over the place, a flaw actually magnified by the hodgepodge of changes made to the film through the years, most notably in inserting now-dated CGI in the 1997 version of the film. The results clash, all the way to the overwhelming grain of 1977 film stock being blurred with 1997 digital makeup. The Blu-ray transfer of the film may be too good—much of the low-budget origins of the film clearly show, and harming the look of the film isn’t a good thing given that its substance is so lacking as well. Now, I still do like Star Wars—but I’ve become less and less of an uncritical fan over the years, and refreshing my memory of the first instalment does nothing to reverse the tendency. What may remain from Star Wars eventually is not much more than the launchpad of a much bigger and deeper shared universe. I’ll be watching the original trilogy in the next few months to officially log my reviews along the way (I saw them all last before I started keeping track of reviews), but I’m not going to be surprised if I end up re-evaluating the prequel trilogy based on my adjusted impressions of the three original films.