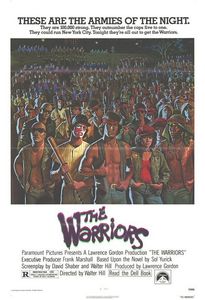 (On DVD, June 2017) It’s a bit of a shame that The Warriors, as a whole movie, never quite lives up to the striking impression left by its first few minutes, as director Walter Hill quickly sketches a nightmarish vision of near-future-New York City dominated by colourful gangs and pervasive decay. By the time the gangs congregate and realize they can take on the Law, we expect a different film than the one that is revealed a few minutes later, as a small gang is framed for a prominent assassination and must fight their way from the Bronx to Brooklyn if they want to survive the night. This initial burst of cool gives way to a far more ordinary narrative, the episodes accumulating in-between the titular heroic gang and their morning salvation. As with such stories, the unlikeliness of characters appearing and reappearing defy logic, but then again The Warriors if far more about the rule of cool than plot logic. We are, after all, asked to cheer for gang members with unsavoury pasts (and, as one of the dumbest characters show, an uncanny ability fall for the most obvious honey traps). On the other hand, there is some kind of panache in seeing gangs listening to a single DJ able to move forces across the island. The 2005 “Ultimate Director’s Cut” heighten the parallels between the Warriors and Xenophon’s classic Ten Thousand tale, and heighten the link between the film and comic books. Still, neither of those changes are more than mildly amusing extras—they don’t add much to the core film. What still works about the film, however, is its stylish presentation. The dialogue isn’t particularly good, the characters are mildly repellent at best but The Warriors manages to remain interesting because it’s a blend of seventies insecurities and timeless stylistic flourishes.