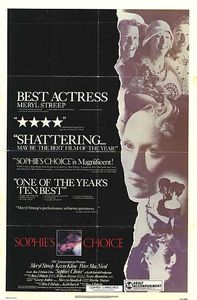 (In French, On TV, July 2017) It turns out that there’s more to Sophie’s Choice than the titular choice made famous by thirty-five years of pop culture: In addition to the Nazi concentration camp drama, there’s a 1947 Brooklyn twisted love triangle featuring a nice-guy writer, damaged Sophie and a volatile schizophrenic. Alas, for audiences without patience, there isn’t much more to Sophie’s Choice than that—at nearly two hours and a half, the movie tests viewers used to a faster pace. It does help that Meryl Streep’s performance is a tour de force, and that she’s able to hit the various emotions asked of the role. (Having watched the film in French, I didn’t get the vocal part of her performance, but the almost ridiculously accented translation suggests that there was a lot of it.) Meanwhile, Kevin Kline (in a debut performance that has little to do with his latter screen persona) is surprisingly disturbing as a character capable of the worst. To contemporary audiences, Sophie’s Choice suffers in two ways: The pacing is far too slow for such a familiar story, and it all leads to a choice that has been spoiled in various ways since 1982. The second isn’t that big of a problem—good movies don’t hinge on twist endings or big revelations—but the first one definitely is: at times, I was struck by the thought that much of the film’s plot would be a sub-plot in a more ambitious film or TV series. See Sophie’s Choice for Streep’s Academy Award-winning performance, but otherwise steel yourself for a dull watch.