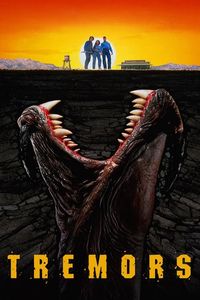 (Fourth viewing, On DVD, August 2017) I don’t quite understand why there isn’t already a review of Tremors on this site given that I’ve seen it so often and enjoyed it every time. But my search engine tells me there’s a big Tremors-shaped hole in my reviews database, so that gives me a perfect excuse to rave about one of my favourite B-grade movies. Tremors is not perfect, but it comes really close in its chosen monster-movie subgenre. After an introduction in which we’re promised thrills, then introduced to a few sympathetic characters, Tremors ends its first act by cleanly explaining the nature of its monsters and why they’re so dangerous. Thus having set up the rules, it then spends the next hour inventively showing its characters outwitting the creatures, while the creatures themselves show signs of intelligence. It’s vastly wittier than most other monster movies, with strong characters and a convincing sense of place. A good sense of humour balances out the horror, turning the film into an unusually accessible thriller by dint of a light-hearted tone. Kevin Bacon is terrific in the lead role, but capable supporting characters include Fred Ward, Finn Carter, Michael Gross, Reba McIntyre and practical special effects that still hold up more than twenty years later. Writer/director Ron Underwood achieved something special here. Never mind the much-inferior sequels—the original Tremors is a near-classic, well worth watching or revisiting.