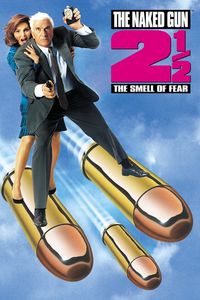 (On DVD, October 2017) While The Naked Gun 2½: The Smell of Fear is slightly less funny than its predecessor, the difference is slight enough as to be negligible, and the original started out high enough. The result is another solid comedy, perhaps a bit more dubiously motivated (what is Frank Drebin doing in Washington, all of a sudden?) but still effectively hitting upon the tropes of police thrillers. There are a few more outright nods to specific films, but they’re still controlled well compared to the grotesque excesses of more contemporary spoofs. The poke at Bush(I)-era American politics date the film more quickly than the generic cop-thriller stuff of the first film. Otherwise, there isn’t much to say about the film that wasn’t already discussed for the first film: It’s a consistent series, now without its flaws but good enough to be worth a few laughs.