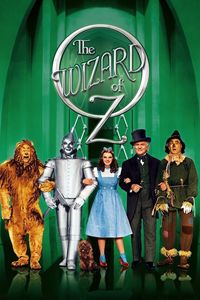 (On TV, December 2017) There are movies that seem to exist outside their own running time, movies that everybody knows through quotes, call-backs, references, parodies and (now) memes, quite independently from actually being seen. I’m not sure I’d seen The Wizard of Oz completely from beginning to end until now, but that hardly seemed to matter in a world where its quotes are clichés, its characters iconic and at least two novels (which I’ve read) are directly based on it. It’s become a cornerstone of American fantasy fiction, and actually watching it only reinforces why: Even in 1939, The Wizard of Oz is a dynamic, literally colourful example of how to deliver a fantasy movie. It’s got invention (although this may not be as clear to contemporary audiences force-fed decades of imitators), a certain amount of wit, a vivacious performance by Judy Garland, and a tremendous amount of competence in delivering a slick escapist fantasy story by way of a movie musical. It simply doesn’t feel like a film from the thirties. While its rhythm is unequal and some section of the film feel role by sheer virtue of having become clichés, The Wizard of Oz is still must-see cinema—see it to understand why it’s become such a cultural mainstay.