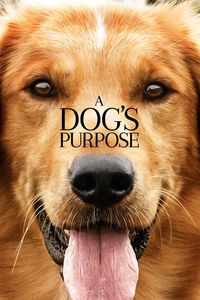 (On Cable TV, January 2018) I’m not much of a dog person, so films such as A Dog’s Purpose start at a disadvantage with a proposition that takes dog mythology as granted. Here, we go a few steps beyond “a dog’s life-long loyalty” to a big reincarnation what-if, as dog’s soul is reborn in several bodies before reuniting with his original owner. It’s about as over-the-top as you can imagine, with expected tearful pyrotechnics toward the end. Much of the drama is counterbalanced by a more light-hearted development in which our naïve canine narrator comments upon the strange habits of humans from his particular perspective. A Dog’s Purpose is, needless to say, precisely engineered to tug at the hearts of dog owners, leaving the rest of us wondering what the fuss is about. (It really doesn’t help that the film’s release was preceded by misleading accusations of animal mistreatment, meaning that the people most likely to condemn the abuse were the people who were the film’s target audience.)  This being said, as a cat person, does the film work? It sort of does, in small doses. The clash between the dramatic arc and the comic moments is an issue, as is the grating deification of its canine protagonist—but once all is said and done, it’s a film that runs on autopilot once the premise is made clear. It doesn’t really use its premise for anything much deeper than a (human) romantic comedy and there’s a lost opportunity there to bemoan, although coming back to the target audience of the film suggests that anything more ambitious would have been missing the point. At least Dennis Quaid turns in the kind of warm and sympathetic performance he’s best suited for. Let me put it otherwise: A Dog’s Purpose wasn’t for me, almost squanders its biggest assets and yet I don’t quite think it wasted my time. It may be the faintest possible compliment, but at least that’s that.