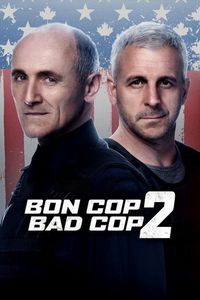 (On Cable TV, February 2018) I had reasonably high hopes for this sequel to the 2009 bilingual thriller Bon Cop Bad Cop. The original was a clever look at Canada’s two linguistic communities, straddling language and culture in the service of a comic thriller. This sequel manages to get both Patrick Huard and Colm Feore to reprise their roles (no mean feat, given both actors’ busy schedules) but seems to forget much of what made the original work so well. The theme of the original film, so cleanly focused on French/English relationships, was clear and compelling—the sequel, alas, muddles along with a half-hearted look south of the border. Taking the plot to the United States is a logical step forward, but some of the America-bashing does get cheap and tiresome. The character work is fine in theory, except that we don’t particularly care about many of the secondary characters, and the film has the bad idea of giving a terminal illness to one of its protagonists, leading to one good death-wish scene but a whole lot of cumbersome emotional baggage to the film’s conclusion (not to mention a possible third film). Bon Cop Bad Cop 2 also falls prey to the easy lure of police brutality—it’s hard to cheer for nominally sympathetic and comic protagonists when they start manhandling and torturing suspects. Too long for its own good, Bon Cop Bad Cop 2 ends up feeling like a chore rather than a fun film … and given that the point of it is a fun film, the disappointment is palpable. I still like much of the film—Huard and Feore are likable, Mariana Mazza makes a remarkable (but almost overdone) appearance as a hyperactive computer specialist and some of the stunts are spectacular enough. But there is a lot of untapped or misplaced potential in the film’s execution as it loses its way, sabotages some of its own goodwill and ends up on a less than fully satisfying note.