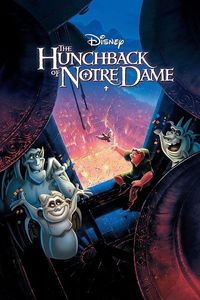 (On DVD, March 2018) I wouldn’t go as far as putting The Hunchback of Notre Dame in the upper half of Disney Animation Studio’s production, but I’m relatively pleased with the adaptation. Bringing a dour Victor Hugo novel to the big screen for kids isn’t the easiest of propositions, and including a love triangle between a superb heroine, a movie-star hero and a consciously ugly hunchback doesn’t seem like the kind of bet worth taking. And yet, and yet, The Hunchback of Notre Dame works when it should. Turning the novel in a musical excuses a multitude of tonal shifts (who knew that funny gargoyle sidekicks would turn out to be effective foils for a murderous judge?) and the skill through which the love triangle is resolved (i.e.: without the death of any of the three) is kind of impressive. Of course, I’ve always really liked Esmeralda, unjustly forgotten as one of Disney’s original princesses (along with Megara, my other favourite Disney heroine) and she gets a chance to shine here as a relatively full-featured character—not to mention being one of the most mature Disney heroines. Of course, the surprise here is Quasimodo, underdog champion of the physically deformed yet spiritually admirable. What impresses me most about The Hunchback of Notre Dame is the way it balances many opposite intentions (not the least being delivering a fairly dark story in a format for kids) in ways that are more successful than the comparable Pocahontas (about which I have complex feelings). Still, there are contradictions and tonal inconsistencies and various other little issues. It’s not bad, and it’s quite a bit better than it should be … but it’s still a distance away from the best Disney movies. Although, if you’re looking for a dark horse candidate to argue for the next time you get to rank Disney Animation Studio movies, The Hunchback of Notre Dame is not a bad contrarian choice.