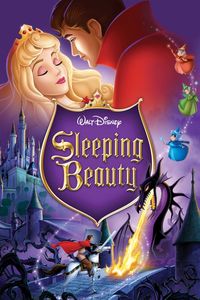 (On DVD, April 2018) Among the Disney Animation canon, Sleeping Beauty is way up there as a crown jewel—it’s spawned an authentic Disney Princess, making it mandatory for parents of young girls. Having an iconic villain in Maleficent (who had her own sympathetic spinoff film recently) also helped. The story is a classic, but, of course, the Disney version had to make a few changes to make it more palatable, and so much of the fun of watching the film from beginning to end (as opposed to the start-and-stop of toddler-watching) is seeing the various adjustments made to make the original fairy tale more palatable to family audiences. Most blatant is the readjustment of the timeline of the film to cover a much shorter time span—allowing the prince and princess to meet well before the events of their final kiss, and taking away some of the sting of “ewww, who does he think he is kissing someone without their explicit or even implied consent.”  From an animation standpoint, Sleeping Beauty has its highs and lows—in character animation, it’s as good as Disney (or anyone else) was at the time, although the use of some optical effects has really not aged well at all. What I do wonder, though, if the film’s influence on generations of fantasy writers—the final sequences is about a knight fighting a dragon and I’m almost certain that the iconography of that sequence has inspired quite a few prose fantasy writers. Otherwise, a close sustained viewing that avoid skipping from one highlight to another highlights that the three fairy godmothers really have issues to work out before they should be allowed to take long-term care of a kid … and that childproofing an entire kingdom against unauthorized yarn spinning is doomed to failure. Still, Sleeping Beauty generally holds up for those who don’t mind a bit of good old princess-being-rescued stuff.