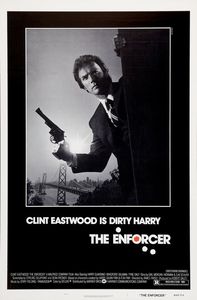 (On DVD, April 2018) Third entry in the Dirty Harry series, The Enforcer is clearly running on autopilot, much of the film being a copy of previous material bordering on self-caricature. Callahan himself is introduced in gosh-wow fashion, first ending a liquor store robbery through excessive property damage, and then having a few regressive choice words about affirmative action once he’s asked to participate in a board to hire female police officers. (One of them is assigned as his partner. You can imagine the rest.)  Once reassured that we’re dealing with the stock image of Harry Callahan, the film then goes through the motions of a stock plot involving domestic terrorists and half-heartedly ties it to a criminal project. There’s a detour through black militantism that feels just this ride of outright racism, although it’s often hard to distinguish between the series’ reactionary bend and the overall attitude of the time. The result, though, remains a half-hearted success at best—while the atmosphere of mid-seventies San Francisco is interesting, the film itself is by-the-numbers and leans too heavily on violence and dispensing of its most interesting character as a motivation for Callahan. Every film in the Dirty Harry series is a bit worse than its predecessor, and The Enforcer starts straddling the line between acceptable and forgettable.