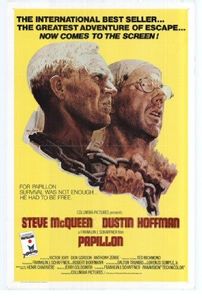 (On Cable TV, July 2018) There are a couple of interesting things in Papillon, not the least of them being a narrative structure that never quite goes where you think it does. Adapted from a true story, the film spends much of its first half obsessing about its protagonist’s escape from a tropical prison … only to keep going and going and going well after that escape fails and then another succeeds. We follow the main character through a few decades as he lives various adventures on his way to recapture freedom and yet more evasions. Steve McQueen makes for a likable action protagonist, with Dustin Hoffman acting as an interesting intellectual foil to his character. Filmed in lush Caribbean locations, Papillon does have exotic scenery and unpredictability on its side, although the overall impact may not be as strong as expected. Surprisingly oneiric at times, which more hallucinations than you’d expect. It does feel long, trying and unpleasant—something not diminished by the film’s taking place in a prison or on fleeing through desperate environments. I would have liked to like it more, but felt surprisingly uninvolved by everything.