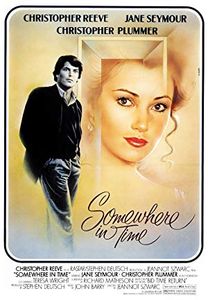 (On DVD, September 2018) For science fiction fans who like the genre for its take on fact-based extrapolations, anticipation of the future or explorations of the possibilities of science, it can be a bit hard to make a space in the SF tent for the unusually robust sub-gene of time-travel romance, in which the mechanics and possibilities of time-travel take a distant back seat to star-crossed romance. Rachel MacAdams has a trilogy of such films in her filmography, but the genre is considerably older than twenty-first century views can expect, and one of the references in that steam is 1980’s Somewhere in Time. The time-travel mechanism is incredibly flimsy—just wish really hard!—although to the film’s credit this becomes a climactic plot point. But the justification is not the point—the point is to allow a young playwright the opportunity to go back a few decades in time to meet and romance an actress. The wish fulfillment is baked into the plot, as is the unrepentant nostalgia presented as unabashed good by the film. It’s a specific kind of film, and I suppose that it does have its audience. Christopher Reeves is noteworthy as the romantic protagonist, ably supported by Jane Seymour with Christopher Plummer playing the heavy as only he can. Somewhere in Time pulls no stops on its way to a timeless tragic romance, so know what to expect. It’s not bad, but aspects of it will strike a few hardened cynics—I plead guilty—as irremediably silly.