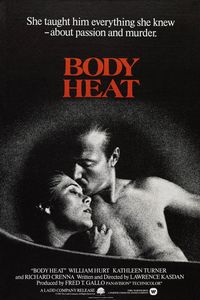 (In French, On TV, October 2018) I watched Body Heat based on nothing more than availability (it was playing and it ranked fairly high on the list of 1981 movies I hadn’t yet seen) and was pleasantly surprised to find out it was an updated riff on classic noir movies such as Double Indemnity, albeit sexed up for the eighties. William Hurt is fine as the pitiable lawyer protagonist, but it’s Kathleen Turner who leaves a lasting impression as the woman that upends everything for him. If you understand the film’s true genre early on (as the reference to Double Indemnity suggests), there are few true surprises along the way of the film’s many twists and turns, but the execution of the story is good enough that it doesn’t matter. The atmosphere of an unbearably torrid Florida is excellent, and the film delves early and deep in the “everyone is bad” moral attitude—we quickly understand that nobody here turns out virtuous. The homage to noir movies is excellent. It makes for a conventional but satisfying thriller, the kind of film that we don’t nearly see that often almost thirty-five years later. Even watching Body Heat in dubbed (European) French added a special je-ne-sais quoi to the film, making it feel even more of a pastiche than it would have been in its original language.