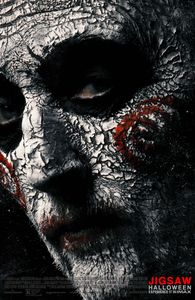 (On Cable TV, October 2018) I’m not generally a fan of torture horror and extreme gore, but I do have a softer spot for the Saw series for a few very specific reasons: I do like the rhythm of its films, especially when the soundtrack goes crazy in an attempt to distract us from weaker plot points. While the series has constantly been a let-down in the way it doesn’t fulfill its own moralistic objectives, it is special in how it constantly plays with structure to indulge in temporal misdirection and surprising revelations. The obvious weakness of such complex shenanigans constantly digging in the same material for twists, acolytes and time loops is that the series feels incredibly convoluted after eight instalments. That’s why I would have much rather preferred Jigsaw to have been a series reboot than yet another increasingly untenable instalment seven years later. But it only took the opening score to put me back into the series’ twisted aesthetics and the curious comfort of a film still going for broke in its direction, set design and plot twists. Jigsaw is pretty much exactly what we’d expect from another entry in the series. Convoluted traps, bloody gore, half-hearted morality plays, death-punctuated narrative and final revelations that don’t make sense the moment you think about them. Everything is incredibly convoluted, but that is part of the charm—don’t use real-world logic and you’ll be fine. This late instalment switches the rusty industrial visual atmosphere of the series to a more rural one, and it’s not much of an improvement … or a change. The Spierig Brothers handle direction duties, bringing their usual flair to the series’ established style without much of a clash. (I’d rather see the Spierigs do more original material, but if Jigsaw keeps them commercially viable, then I won’t complain too much while awaiting their next film.) Jigsaw’s adherence to the codes of the series means that experienced viewers will spot when the film pawns a few cards—whenever a death occurs with an unusual lack of gore, for instance, it’s easy to recognize it as A Clue to later revelations. Jigsaw, in other words, is no more and no less than another instalment perpetuating more of the same. Fans and haters will react accordingly.