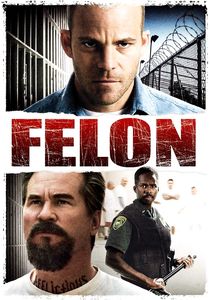 (In French, On TV, November 2018) Prison films have a long, long history in Hollywood, and the earliest of them have even been able to effect some social change in calling for reforms and more humane treatments. Alas, with the newest American prison-industrial complex and worship of punitive policies, that time is past. The newest wave of prison movies simply describes what’s happening without editorializing for better conditions and the result can be disheartening, especially considering the markedly higher rate of imprisonment for American males as compared to other most civilized countries. (Watching American prison films as a Canadian is the kind of thing that makes you want to hug your Canadian passport.) In this context comes writer/director Ric Roman Waugh’s Felon, a story about how an ordinary man gets stuck in the gears of the system and becomes increasingly familiar with the violence inherent in the system. Once you’ve seen enough contemporary prison movies, Felon feels very familiar. Some of the plot logic is weird—including the confounding set of circumstances that sends an ordinary man to high-security jail. But it may rank a little bit higher now than upon its release because the last two big prison movies (Shot Caller and Brawl in Cell Block 99) have been of such unrelenting grimness that Felon manages to feel uplifting merely by not condemning its protagonist to death or a life sentence. Otherwise, it’s a fair standard thriller, generally well executed but not specifically memorable.