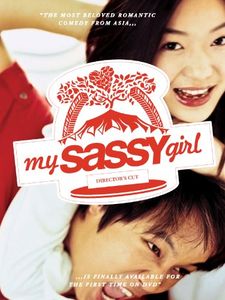 (Hoopla Streaming, December 2018) Those who maintain that romance is the universal language will be comforted by the existence of Kwak Jae-yong’s My Sassy Girl, a South Korean romantic drama that hammers the tropes of the genre as blatantly as any Hollywood movie. The story is a bit messy, but it has to do with an unstable (quirky, sassy, fun, abusive—take your pick) young woman barging into a quiet young man’s life and upending it completely. The romance is further heightened by a lengthy separation between the two and a dramatically ironic finale. It starts out funny, becomes poignant later on, and finishes with big romantic guns firing by the very end. Of course the fun is in the details, in the quirkiness of her behaviour, the three movies imagined by the hero, or the atmosphere of a somewhat familiar romantic comedy set in contemporary South Korea. While this is all very cute and quite accessible (the film was one of the highest-grossing movies in South Korean history at the time of its release), I can’t help but wonder how much less fun the film would be if the gender roles had been inverted. But that’s asking too much of a film not meant to sustain such scrutiny. In the meantime, it’s best to just appreciate My Sassy Girl and have fun along the way.