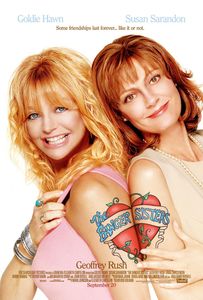 (On Cable TV, December 2018) The Boomers were clearly getting old in 2002, and The Banger Sisters can certainly be seen as an attempt to impose their own anxieties on the big screen. Here we have fifty-something Susan Sarandon and Goldie Hawn playing forty-something characters who reconnect after a few years apart—while both were rock groupies in their youth, one of them has settled and the other one hasn’t, and much of the film’s comedy/drama comes from the contrast between the two. There’s not a whole lot there that we haven’t seen in other movies, but if the film works it’s because of the well-worn charms of the stars. Sarandon is very much in-persona as the once-wild now-straight mom who (predictably) learns to loosen up, while Hawn plays the still-wild one who does the loosening up. (It would be Hawn’s last role before a 14-year eclipse from acting.) Geoffrey Rush is remarkable playing a writer with issues of his own. It’s not much of a movie, and those who have a grudge against Hollywood Boomers’ refusal to age gracefully will find much material for their angst. But in a sense The Banger Sisters isn’t supposed to be much more than an actor’s lighthearted showcase. It works better as such.