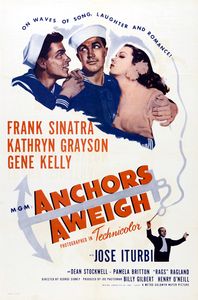 (On Cable TV, January 2019) I’m probably showing the shallowness of my pool of reference, but Anchors Aweigh certainly struck me as a dry run for the more successful On the Town four years later. After all, both movies star Gene Kelly and Frank Sinatra as sailors on shore leave, reaching for the same kind of audience-friendly mixture of comedy and music. It’s as if both sprang from the same starting point, with On the Town improving upon its predecessor by featuring more couples and swapping Los Angeles for New York. Still, Anchors Aweigh is far more than a prototype—it’s a perfectly enjoyable film in its own right. The plot is serviceable as a way to showcase what its leads do best. Sinatra is great while singing a quiet number at a piano, while Gene Kelly dances as well as ever—famously with an animated Jerry the Mouse, but also in a market sequence, and then again in a dream Spanish adventure sequence. The colourful look at 1945 movie studios pleasantly blurs the line between fiction and memorializing then-reality. George Sidney’s direction is slickly professional (especially during the Hollywood Bowl piano sequence), and female lead Kathryn Grayson is very, very cute. While comparisons with On the Town do Anchors Aweigh no favour, it’s a very enjoyable musical, and it’s doubly worth seeing by classical Hollywood fans by virtue of showing us what MGM studios looked like at the close of WW2.