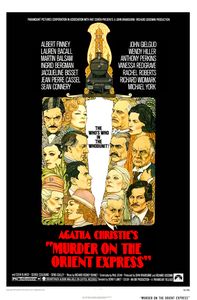 (On Cable TV, January 2019) As much as it may displease some purists, there are times where the remake improves upon the original film, and my feeling after watching the original Murder on the Orient Express is that this may be one of those pairs. Oh, I liked it well enough—there’s something just delicious about seeing a gifted detective stuck in a remote location (here: a train immobilized by snow) as a murder has been committed and everyone is a suspect. Agatha Christie wrote strong material in her original novel, and it’s up to the filmmakers to do it justice. Under Sydney Lumet’s direction, the atmosphere is quite nice, and the editing is surprisingly modern with a number of flashback cuts. The ensemble cast is remarkable, with names such as Lauren Bacall (who looks fantastic), Ingrid Bergman, Sean Connery, Vanessa Redgrave, Michael York, Jacqueline Bisset and Anthony Perkins in various roles –some of them with very little time as the story goes from one interrogation sequence to another. Still, as absorbing as it can be, it’s probably worth watching the original before the remake, as the cinematic polish of the later Kenneth Branagh version is far better controlled, and so is the take on Poirot: Here, Albert Finney plays him far too broadly as a farce character, whereas the remake wisely makes sure that behind whatever eccentricity shown by the detective is a conscious veneer soon exposed. The Murder on the Orient Express remake doesn’t necessarily strip the original of anything worthwhile, but it does make it feel slightly less impressive.