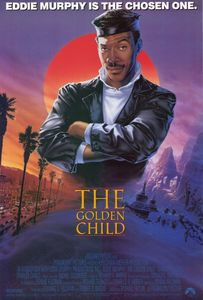 (In French, On TV, January 2019) There were a lot of high-concept movies and a lot of fantasy films in the mid-1980s, and The Golden Child looks like a wacky collision between both, with the headline being the presence of then-red-hot Eddie Murphy in the lead role. The plot has something to do with a Los Angeles private detective (Murphy) being tasked with protecting a boy with mystical power from supernatural enemies, both in L.A. and in Tibet. Murphy being Murphy, his character is of the wisecracking variety, only becoming serious about his assignment when there’s no more room for jokes. The far-east mysticism is used to its fullest extent, and I suppose that one of The Golden Child’s biggest comic draws is the clash between black American outsider street smarts and otherworldly eastern mythology thrills. This being said, Murphy does look a bit lost in supernatural adventure, the irreverence of his character often being more irritating than endearing in the early stages of the film. Among supporting actors, we have an early role for Charles Dance (providing an “applause” GIF along the way), and Charlotte Lewis looks amazingly good (although she’s not much of an actress). Some of the special effects are more evocative than convincing. A few moments are amusing. Otherwise, The Golden Child is a product of its time, and it often feels like a cut-rate analogue to Big Trouble in Little China. It’s not that good, somewhat mis-aimed, and doesn’t always use the opportunities it has, and was probably hampered by having a megastar like Murphy in the lead role. Still, its strong genre roots and Murphy’s persona do make it somewhat more memorable than many other comparable films of the time. The Golden Child does have a quirky side as well: how many other movies make a good use of Pepsi product placement as a funny stop-motion dance interlude?