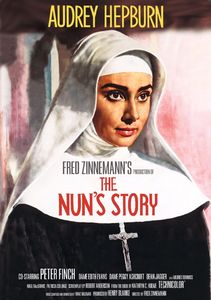 (On Cable TV, January 2019) The premise of The Nun’s Story doesn’t sound like a good mix: Audrey Hepburn playing a noviciate nun? Her better-known screen roles aren’t anywhere near that type of character, and yet she successfully delivered an intense dramatic performance here, solidifying her ingénue superstar status with several accolades for her acting talent. Coming almost exactly in the middle of her film career, some have called the movie Hepburn’s finest dramatic performance, and that sounds about right even if you think that comic performances are often more challenging. At first, The Nun’s Story does feel like a wandering procedural about the life of a noviciate, going through the somewhat dull process of the apprenticeship required for a young woman to take her vows. For a rather long time, the film navigates a fine line between being boring and interesting, as it doesn’t hurry through its protagonist’s apprenticeship even after taking her vows. But The Nun’s Story does become far more interesting—and relevant to Hepburn’s life—once the last act rolls around and suddenly the Nazis invade the movie. That’s the point when we can understand Hepburn’s interest for the role (after all, she did serve in the Dutch Resistance as a teenager), and the film becomes far more interesting in opposing obedience versus the moral imperative to resist the occupation. The conclusion feels very appropriate to the character. The direction and cinematography could have been a bit stronger, but even in their current state they do carry the film to a satisfying conclusion. Anyone who feels restless during the first half of The Nun’s Story should stick around—it’s laying down the groundwork for later moral choices, and the film sharply improves in time for its conclusion just as Hepburn herself comes back to the fore.