(On Cable TV, June 2017) If you’ve been longing for more machine guns and explosions in your western classics, then this Magnificent Seven remake is just for you! I kid, but not much: Rather entertainingly updating the 1960 classic for contemporary audiences, this remake crams a lot of gunplay, explosions and heavy gunfire in the result. Under the veteran eye of director Antoine Fuqua, this Magnificent Seven sports lush cinematography, vivid action sequences, a pleasantly diverse cast and a tighter script. To its credit, it doesn’t try to ape the original as much as play around with its basic structure and characters. Our lead character now had a personal connection to the antagonist that works rather well, Denzel Washington makes the role his own rather than try to ape Yul Brynner, and Chris Pratt doesn’t even try to be Steve MacQueen in a similar role. The images are more spectacular, the action is far more intense (at times, bodies drop like flies to a degree that feels excessive) and the script is cleaner. While The Magnificent Seven remake will never become a classic, it’s a decent enough reinterpretation and an entertaining shoot’em-up western in its own right.

(On Cable TV, April 2015)  I don’t think you could come up with a more generic thriller premise than The Equalizer if you tried: A retired special-ops specialist takes revenge on mobsters for putting a young friend in the hospital.  That’s it.  Nothing more, nothing less.  Do you really have any doubt that our protagonist will achieve his ultimate revenge?  Faced with such a generic plot, The Equalizer can only distinguish itself through competent execution.  Fortunately, it can depend on Denzel Washington to bring his usual intensity to the role, and on director Antoine Fuqua to deliver a dollop of style along the way.  The Equalizer may be strikingly unoriginal, entirely linear and far too violent, but after a slow first act, it escalates the tension steadily, showcases Washington’s steely resolve and delivers the bloody vengeance as expected.  The last act (set within a home-improvement store) seems far too long if you’re not entirely invested in the kind of carnography in which a dozen opponents get dispatched in various ways.  But it’s not sloppy, slapdash or accidental: The Equalizer is exactly the kind of movie it wants to be, and it ought to satisfy those who are looking for exactly that.

(On Cable TV, January 2015)  It’s hard being an aging action star.  Stallone seems unwilling to acknowledge that it’s happening to him, but Arnold Schwarzenegger seems to be trying a few strategies to remain in the game long after his retirement years.  In Sabotage, he takes up guns and a leadership role as an alternative to fisticuffs and stunts, and he’s easily the best in an ensemble cast.  Alas, he may also be the best things in a dirty violent thriller that seems delighted in its own gory nastiness.  Sabotage is all about dirty special agents who have come to believe their own mystique and proceed, in the opening sequence, to try to rob Mexican gangsters out of a few million dollars.  It doesn’t go well: one of them is killed on-site, prompting an official investigation.  When no evidence of wrongdoing is found, the aging leader of the gang goes back to find a unit that has lost its morale.  Thing seem to perk up as they train together, but then they all start dying one after another is a series of bloody murders.  We’d probably care more about the mystery if the victims weren’t all hyper-aggressive killers –it takes a long time for a lawful character to be introduced, and even then all she can do is being duped and witness the carnage.  The ending is very weak, although we’d told that the studio interfered and that the alternate endings available on the DVD are both stronger than the one that ended up in the theatrical release.  Even then, Sabotage remains a far-too-violent routine thriller –much like for his previous Olympus Has Fallen, director Antoine Fuqua ought to lighten up a bit.  In the meantime, it’s a perfectly acceptable entry in Schwarzenegger’s post-governorship career. 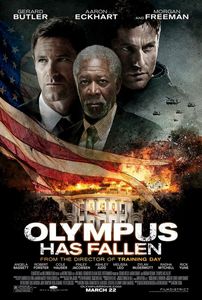 (Video on Demand, September 2013) For everyone who thought that overly patriotic high-concept action movies had gone out with the nineties, the good news is that Olympus Has Fallen doesn’t merely exist, but is the first of two “White House taken over by terrorists” films released in 2013.  We’ve come a long way from 9/11 when such big-budget high-concept action movies can be released widely, and that’s a good thing.  Whether the films are any good is another subject entirely, and watching Olympus Has Fallen, it’s clear that while it occasionally hits its mark, it doesn’t quite understand part of what made those 90s action movies so enjoyable.  In a few words: PG-13 action over R-rated violence.  Olympus Has Fallen, rated R, seems overly violent, profane and humorless for what is supposed to be popcorn entertainment in the Die Hard mold.  It tries to be broadly amusing with funny quips and overdone action set-pieces, but then it plasters its dialogue with useless profanity and revels in showing gory violence (some of which perpetrated gleefully by the so-called hero).  The result can’t very well be watched with the kind of carefree fun that PG-13 action films usually create: you’re always on guard for the next excursion in violence and gratuitous language.  It doesn’t help that Olympus Has Fallen has little wit, charm or grace: Gerald Butler is merely OK as the lone operator chasing down the terrorists within the White House –anyone else could have done just as well.  Morgan Freeman sleepwalks through another presidential role, and while it’s good to see Angela Bassett get another role, this one won’t leave any lasting impression.  Director Antoine Fuqua is a seasoned veteran who knows how to put together an action scene, but he seems hampered by sub-standard CGI work (some of the C-130 gunship sequences look unfinished) and a script that never exceeds the perfunctory and seems to forget how to tie up (or even acknowledge) loose ends.  Olympus Has Fallen is watchable, but it’s not hard to complain about various elements that could have been improved to produce a better film.  Now let’s see if White House Down does any better… [January 2014: Yes, White House Down is quite a bit better.]

(In theatres, March 2010) Brooklyn’s Finest is a profoundly ironic title, but there’s little sly humour in the rest of this deliberately gritty and down-beat police drama that follows three variously-corrupted Brooklyn policemen.  This isn’t director Antoine Fuqua’s first corrupt cop drama (remember Training Day?), nor the first corrupt cop drama in recent memory (Dark Blue?  Street Kings?  Pride and Glory?  Righteous Kill?), so viewers may be spared a sentiment of déjà-vu.  Where this film distinguishes itself is in structure: The three stories rarely intersect, except for a bit of tragic cross-fire at the very end.  In the meantime, we get Richard Gere (far too proud and well-coiffed for his own role) as a disillusioned veteran marking down his last days, the always-fantastic Don Cheadle as an undercover informant with stronger ties to criminals than his own superiors, and Ethan Hawke as an overwhelmed father-of-many who resorts to stealing drug money in order to supplement his pay check.  Brooklyn’s Finest has a patina of unpleasantness that is supposed to transmute into authentic grittiness, but this illusion doesn’t sustain the steadily-increasing body-count as criminals are gunned down in police raids by the dozen.  Few of the film’s characters can be expected to live until the credits.  This sombre tone, alas, creates expectations that the unfocused, moralistic ending can’t match: Since this isn’t a popcorn picture, we look in vain for a deeper message and a stronger conclusion than a final hail of bullets.  The script, while interesting throughout, fails to cohere in its third act and the result is a mild disappointment.  Like many of its corrupted-blue brethren, Brooklyn’s Finest will be another forgettable DVD in the crime section; adequate to satisfy those looking for that kind of film, and insignificant for everyone else.