(In theaters, December 2004) Sigh. As a big fan of both prequels, I guess I’m the only one to blame for my heightened expectations for this third instalment of the series. But after the high standards set by Stephen Norrington and Guillermo del Toro, director David Goyer (who, shockingly enough, also wrote all three film) seems only too happy to deliver the kind of by-the-number B-grade film we see all too often on straight-to-video shelves. Wesley Snipes seems bored by the undead material, or annoyed that the spotlight is off on two younger vampire hunters. Indeed, Jessica Biel has the requisite moves and Ryan Reynolds steals the show with motor-mouth action, but neither of them can do much to rescue Blade III from the doldrums. The dumbing-down trend of the series’ writing continues unabated in this third film, what with a hand-to-hand fighter forgoing her sense of hearing for trip-hop, one of the most boring Draculas in recent memory, useless characters and lame gags all around. Alas, whereas the first two films could rely on some dynamic action, David Goyer’s first effort merely wastes CGI dollars and recycles Hong Kong action moves with no flair. How bad is it? Well how about this: Françoise Yip is in the movie, but her total screen time is measured in seconds. Outrage! See this film out of a sense of duty if you must, but don’t expect much. A sequel is doubtful; maybe it’s better that way. 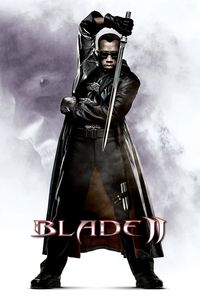 (In theaters, March 2002) Once in a while, the mid-twenties male movie geek that I am finds a reason to fall in love with cinema all over again. Strangely enough, truly great films don’t do this as often as flawed B-movies that I happen to really enjoy. Sure, okay, Traffic is a good film, but it doesn’t inspire me to the same level of devotion as the wonderfully quirky Dude, Where’s My Car?. Blade II is one of those films about which I can rave for hours, simply on the basis that it’s one of those all-too rare horror/action film that really push the gore/action quotient to insane levels. It’s furiously paced, it stars a highly charismatic hero (Wesley Snipes, better than ever), it doesn’t skimp on the special effects and gives you a geek-worthy movie experience. Blade II improves on most of the strengths of the original; more action, more vampires and more coolness. (One notable exception is the scant development of the vampire-world mythology, which revert from the original’s “council of vampires” to a more hum-drum “vampire monarchy”) The action sequences are directed with impressive skill and fluidity, though some blurry shots betray an imperfect integration of CGI and live-action elements. For director Guillermo del Toro, this is a triumphant return to mid-budget American films after the tepid Mimic. Perhaps the best things about Blade II is how much it pushes the limits of its MPAA-approved rating, ending up as one of the hardest-R movies in recent memory. Hence my unconditional love for the film, vampire-slayings and tense action sequences aside; if middle-aged ladies can have their sensitive Bridges Of Madison County and pre-schoolers can have their safe Thomas The Magic Train, then why can’t I get my Blade II? Thank you, Snipes and del Toro; once again, cinema has something to offer me.

(Second viewing, On DVD, January 2003) Adrenaline junkies should take note that there aren’t many better choices than this one as far as sheer action coolness is concerned. This film doesn’t try to do any anything but bring a kickin’ action comic book to life, and boy does it succeeds like few others. Blade II is packed with cool scenes, loud music and plenty of macho posturing. It’s almost perfect for what it wants to be. The DVD is enough to make any geek fall in love with the film again, as the 2-disc edition is dominated by the imposing presence of director Guillermo del Toro. His candid co-commentary (along with producer Peter Frankfurt) is reason enough to buy the DVD; profane, honest (he regularly points out flaws in the finished film, and is even less merciful with the original script he had to shape up for the screen), quick with an amazing array of classic comic/anime/film references and devastatingly funny, del Toro proves to be the best man for the job and a talent to watch. In comparison, the second commentary (featuring writer David S. Goyer and Wesley Snipes) is a bit too smug and scattered. If you like action movies, this is it; the slam-bang jewel of 2002.

(In theaters, August 1998) This is the movie that Spawn tried to be. A very cool comic-book-inspired action-fest starring a bigger than-life superhero against a conspiracy of evil creatures (in this case; vampires). Blade begins with one of the most gripping introduction possible (I won’t spoil it), and if it doesn’t quite maintain this level of energy all throughout the movie, it finishes on an adequately action-packed finale. The direction is kinetic, and the little over-the-top stylistic touches push Blade in the realm of the really cool movies. Wesley Snipes is great, the girls are cute, the hardware is mouth-watering and the villain does a creditable job. It’s not only a B-movie, it’s a B+-movie!

(Second viewing, On DVD, May 2002) Most dynamic vampire-hunting film ever? Well, not since the sequel came out, but the original Blade still kicks a lot of blood-sucking butt, and the DVD is still one of the best collector’s editions out there. Not only does it include the requisite making-of, but it also features a half-finished alternate ending, plus plenty of discussion about how and why they settled on the finished product. The best thing about the disc, though, is the commentary track, which features snippets from various crew and cast members. Wesley Snipes seems arrogant and silly; Stephen Dorf sounds a bit sloshed and star-stuck. There is a cinematographer that can’t stop bitching about the compromises he must make in his work. A considerable amount of time is spent discussing rejected concepts and alternate sequences. (One of which, the “baby vampire” seems cruelly absent, though the “body freeze” answers one huge logical howler I’d noted in a previous review.) In sum, a very good track that takes some time to deliver, but which really does hold our interest. The filmmakers always knew what kind of movie they wanted to deliver, and the result is there in its full DVD glory. A must-buy if you’re a fan of the film.