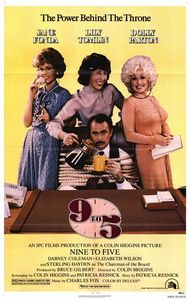 (On Cable TV, February 2017) I recall seeing Nine to Five as a kid, but given that I only remembered the iconic theme song, I will pretend that this was like watching a new film. It certainly feels like a time capsule from the late seventies, with its broad statements about feminism, contemporary fashions and work culture at a pre-computer, barely-photocopier era. Jane Fonda is a bit dull as the intentionally blank heroine, but Lily Tomlin is very good as a cynical office manager, and it’s a treat to see Dolly Parton in her prime as a smarter-than-she-looks secretary. Their story of female empowerment and revenge against a no-good boss (sorry, “sexist, egotistical, lying, hypocritical bigot”) is good for a few chuckles, especially when the film goes off the reality rails and features three outlandish dream sequences. As for the rest, the film has aged depressingly well: it’s discouraging to realize that much of the feminist content remains effective thirty-five-years later—there’s been progress, but not that much of it, especially in the United States. The theme song hasn’t gone out of style either: “Working nine-to-five/What a way to make a living…”