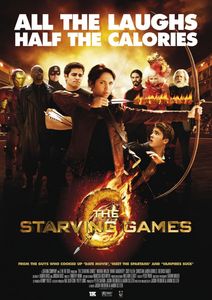 (On Cable TV, May 2014) Every so often, I’m tempted to check out the latest Friedberg/Seltzer “comedy” just to check that this writing/directing duo is still operating at the lowest possible level. The Starving Games confirms that, yes, they are still all the way down there. Showing no measurable improvement over their streak of laugh-free comedies, it features the usual crude humor, meaningless pop references, cartoon violence, cocked-head reaction shot in lieu of a laugh track and lazy re-creations that have marred their previous efforts. It’s meant to be a straight-up feature-length parody of The Hunger Games, but no thought has been spent trying to comment upon the original source material or going further than simply aping the work of better creators. This time, however, Friedberg/Seltzer’s effort seems shoddier than usual: The Starving Games has a visibly lower budget than their previous efforts, and even the bare 70-minutes running time (padded with nearly a quarter-hour’s worth of bloopers and credits) feels endless. There are a few chuckles out there, but not as many as you’d think from even a low-budget parody film: I had more fun watching even the not-so-good A Haunted House. The sole bright spot is Maiara Walsh in the lead role: despite the terrible role, she throws herself in her performance with energy, and remains unexpectedly captivating throughout. Otherwise, there really isn’t much to say about The Starving Games: it’s empty even by the standards of dumb comedies, and only finds a purpose by being filler in-between better things. 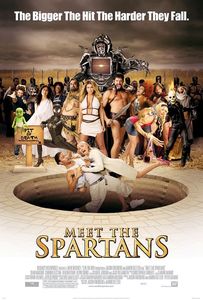 (On DVD, December 2011) Watching Friedberg/Seltzer “parody movies” is an exercise in curious masochism, such has their entire body of work been so embarrassing to date.  Meet the Spartans has an unchallenged reputation as one of the worst box-office-number-one movie in recent memory (Fact: It won over Rambo as the top-selling movie in the US upon release in January 2008) and viewing it merely confirms its standing.  Even critics wary of superlatives won’t have a hard time saying that this is the worst so-called spoof comedy on record so far.  A witless recreation of key scenes from 300 with added bodily fluids, celebrity references and cartoon violence, Meet the Spartans struggles ineptly to even deliver smiles.  Relentlessly stupid, irrevocably dated to 2007 and never too sure when it has ground a concept into the ground (the “Pit-of-Death” sequence goes on for five minutes), this film isn’t amusing even to those who thought 300 was an overrated piece of pap aimed at teenagers.  Almost painful in its ineptness, Meet the Spartans doesn’t really understand what humor is, and seems happy to substitute the same tired elements (grossness, celebrities and violence, usually mixed together).  There’s no cleverness to the commentary on 300 (forget about discussing the fascistic elements when even the jokes at the original film’s unintentional homoeroticism seem like mean-spirited homophobia) and no conceptual humor at throwing together pop-star abuse in an antique context.  Meet the Spartans doesn’t work as a parody; it doesn’t work as absurdity and it doesn’t even work as caricature.  It just doesn’t work, and its aggressiveness in repulsing its audience seems a key piece of why it doesn’t.  I have seen several low-budget straight-to-video comedies that were funnier than this.  Struggling to find nice things to say about this film, it’s true that Sean Maguire makes a convincing replacement for Gerard Butler and that the production design is often instructive in showing how to cheaply re-create 300’s distinctive aesthetics.  Otherwise, the unrated DVD edition has a few bonus features that are better than the movie itself: The “Tour the set” featurette is sporadically amusing, whereas the commentary track is arguably funnier than the main feature as actors and filmmakers have a good time.  Tellingly, though, everyone seems repulsed by the film’s grosser moments… leaving open the question as to who thought those moments were a good idea.  No wonder Friedberg/Seltzer have earned such widespread hatred in the movie-fans community. 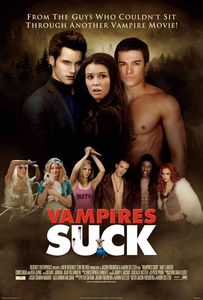 (In theaters, August 2010) Given that Jason Friedberg and Aaron Seltzer have one of the most pitiful filmographies in cinema history, any savvy filmgoer willingly choosing to go see their fifth film has only themselves to blame if it ends up a terrible experience.  (Even if one’s excuse is, ahem, “I’m on a different continent, I want to see a movie and I’ve seen all of the others at the neighborhood theater.”)  Their concept of “spoof comedies” is closer to “dumb retelling”, and even if Vampires Suck takes on the much-deserving Twilight series as a target, it’s not necessarily any more interesting than its Epic Movie or Disaster Movie predecessors.  They simply re-create a few key sequences, add in more profanity, violence and pop-culture references and expect that the simple shock of recognition is enough to make audiences laugh.  There is little commentary on the source material: both times that Vampires Suck attempt to say something insightful about Twilight, it’s instantly followed by self-congratulatory “I’m so smart!” punch-lines that makes it feel dumber.  Otherwise, the film jerks from one familiar reference to another, occasionally scoring a smirk in the same way a thousand shots from a thousand shotguns will eventually hit something worthwhile.  (That the source material is so poor and so ripe for satire isn’t much of an advantage: I have seen several Livejournal posts from fans getting better laughs out of the series’ problems.)  What’s most striking, I suppose, is the poor quality of the humour and the imagination surrounding the parody: The actors do OK (Jenn Proske is particularly on-target spoofing Kristen Stewart-as-Bella) and the technical qualities of the film are good enough given its budget, but both the writing and direction aren’t anywhere near feature-film quality.  The good news, writing this review after weeks of therapy, is that Vampires Suck didn’t make all that much money: Reviewers can bark and growl impotently, but studio executives looking at financial statements can be far more effective in ensuring that we never see anything from Friedberg/Seltzer again. 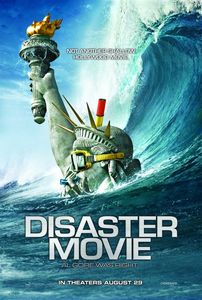 (On DVD, January 2009) The Friedberg/Seltzer writing/directing duo is well on its way to the Comedy Hall of Fame in that everything they’ve done is almost purposefully unfunny. With a track record that spans everything from Date Movie to Epic Movie, the only reason to see their films is to check if they’re still just as painfully dull as the last time. Most of Disaster Movie is reassuringly awful, showing no comedic talent whatsoever, and even less writing/directing skills. They still think that a reference equals a laugh, that abusive violence is always funny and that vulgarity is the height of subversion. They also don’t have a clue about pacing, or when a joke is best left alone. Clearly, the under-12 crowd has lower standards than the rest of us. Still, there are occasional signs of life in Disaster Movie, and they usually occur whenever Friedberg/Seltzer reach away from their usual shtick: The parodies of Juno and Enchanted‘s Princess work about half the time because the characters do more than beg for recognition by offering genuine criticism of the originals. But trying to salvage something out of this mess is a bit desperate, because the lame gags outnumber the tolerable ones by about ten to one. It’s probably best to skip this film, and even preferable to avoid thinking about why Friedberg/Seltzer are still getting work in Hollywood after a career as terrible as theirs. 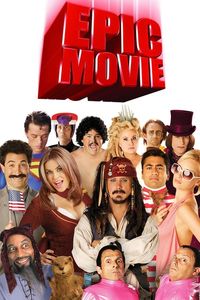 (In theaters, February 2007) Every time I think I’m a good and forgiving reviewer, a stinker like Epic Movie comes along and sets me straight. I normally like comedies and I’ve got a big soft spot for parodies: I think I may have been one of the few non-teens to give a passing grade to Scary Movie 4, for instance. But the current crop of parodies is a long way away from the classic days of Top Secret!: Rather than honest good jokes, we get re-creations of familiar big-budget films with violent slapstick and hip-hop references. There is little intent to subvert the original films, point out their flaws, or use the material as a stepping stone to a more original story. Epic Movie is among the laziest of this wave of parodies from writing/directing duo Friedberg/Seltzer (and, one hopes against dollars, one of the last). A mish-mash of Narnia, Charlie And The Chocolate Factory and many others, Epic Movie just seems happy to wallow in recent pop-culture references. Alas, none of them play off each other, the laughs are few and the cumulative effect is irritation. (There’s a moderately witty use of the Click remote control late in the film, but it comes far too late to save anything.) Heck, even the normally amusing Kal Penn is wasted in this film. Perhaps the only thing Epic Movie is good for is showing off the cuteness of Faune Chambers (who’s really playing the role of Regina Hall in the Scary Movies), but if the price to pay to be in her fan-club is to see this film, it may be worth waiting for her next role. Lazy, dull and dumbly reaching for the lowest common denominator, Epic Movie seems determined to prove how little laughs can be included in a “comedy” without having the audience ask for refunds.