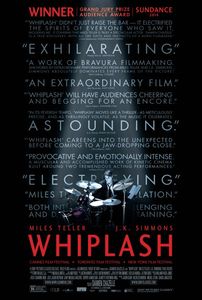 (On Cable TV, August 2014)  Anyone could be forgiven, after reading a short summary of Whiplash’s plot (“Student Jazz Musician tries to prove himself to demanding teacher”) that this would be a relatively sedate and dull affair, somewhere along the lines of a musical Good Will Hunting.  But that would be a terrible mistake, because Whiplash tells a musical coming-of-age drama with the tempo of an action movie.  Miles Teller is pretty good as the student willing to sacrifice just about everything in order to become a great musician, but J.K. Simmons is stellar as his nemesis, a teacher who thinks that developing a great musician or worth the worst methods imaginable.  His performance is Whiplash’s biggest special effect – a blend of meanness, bad temper, outright machiavelism and unapologetic righteousness.  Much of his character’s complexity is reflected elsewhere in the tight script, which delivers a deceptive triumph of an ending with implications that aren’t as triumphant as you may think.  Otherwise, the music sounds great even to untrained jazz listeners, the editing is spectacularly good and Damien Chazelle’s direction is effective without being showy.  The ending is terrific and caps off a film with very little padding.  (In fact, as the mystery of the missing folder suggests, it may even miss a bit of connective narrative.)  Whiplash, in other words, is a surprisingly good film, a more-than-worthy Oscar nominee, and a memorable viewing experience.  Who knew you could care so much about a drum solo? 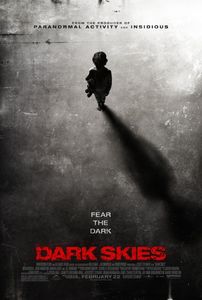 (On Cable TV, January 2014) Astute commentators have already pointed out that stories about alien abductions now have more to do with horror than science-fiction, and Dark Skies does little more than demonstrate this with a perfect straight-faced lack of self-awareness. The story of how a typical suburban family is terrorized by alien invaders coming to abduct one of their own, Dark Skies ends up running through the motions of a formula-driven horror film with little more than competency. As the strange events pile up, coherency becomes less important than a steady drip of chills, and if writer/director Scott Stewart wisely avoids the cheapest shock tactics, what ends up on the screen is more eerie than straight-up scary. The assaulting aliens have near-omnipotent powers, making the idea of resistance a farce. Still, there’s a bit to like in the surrounding material: The portrait of a family being threatened is realistic enough in its domesticity, Keri Russell gets a good role as the mother under duress and JK Simmons makes the most out of a thankless exposition-heavy role. While the material is generally handled with a fair bit of skill, Dark Skies remains uninspired and uninspiring throughout: There’s little zest to the movie, and the results just pale in comparison with some of the better horror movies of the past few years. (For a much, much better recent family-in-peril horror thriller, see Sinister.) For genre commentators, there’s something depressing in the way SF stock elements such as abducting aliens are used as serviceable props in a mediocre horror film: but so things go when mythologies get absorbed by the mainstream.

(In theaters, July 2004) Maybe I’m getting too old for this stuff; I wasn’t a particularly enthusiastic fan of the original Spider-Man (too dull, too ordinary) and if the second one is distinctly better, I’m still not all that convinced. Oh, certainly, I just love parts of this sequel: the operating room sequence is pure Evil Dead Raimi, the action sequences are directed with impressive fluidity and the villain is a lot of fun. Even the over-arching story makes sense and at least tries to reach above the usual superhero crap. But it’s not through dull romance and mortgage concerns that I try to escape reality, and so Spider-Man 2 just isn’t as much fun when it’s dragged-down to harsh reality, especially when it starts forgetting that there’s a super-villain running around. Worse is the heavy-handed direction and the on-the-nose dialogue, which makes sure to highlight every single emotional nuance to make sure that even the dumbest teen in the audience doesn’t miss a thing. By the time the crotchety old lady delivers her speech about the importance of heroes, it’s hard to tell if the filmmakers are laughing at the audience. Oh well; at least JK Simmons is excellent as J. Jonas Jameson and Alfred Molina gets to show that fat middle-aged men can be super-villains too! (Talk about an untapped segment for wish-fulfilment) Blockbuster-wise, it could have been worse. But it could have been better too, and it does no one any favour when the film’s aim reaches so obviously for the broadest common denominator.