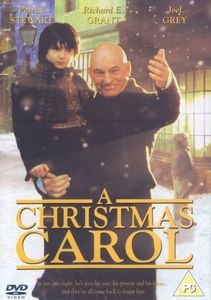 (In French, On Cable TV, December 2018) I’ve been sampling and watching A Christmas Carol adaptations all December long, and I think that this 1999 BBC production is my favourite straightforward version of the Dickens story. (My favourite of them all is 1988’s Scrooged, but I’m counting it as a comic variant, not the foundational material.) It certainly helps to have Patrick Stewart as Scrooge—the production is meaningless if you don’t have a strong actor in the lead role, and Stewart can play cranky or beatific better than anyone else, with the gravitas required to pull it off. It also helps that 1999-era special effects were iffy but just good enough to pull the ghostly segments of the story, and that there had been enough productions prior to this one to identify the best elements to highlight. Production values are high (especially for a late-1990s TV movie) and the film does not overstay its welcome. In the end, 1999’s A Christmas Carol is a familiar story well told without the excesses of later version (that 2009 CGI one, ugh) or the shortcomings of the many earlier takes. 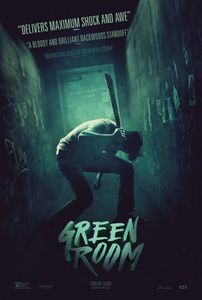 (Netflix Streaming, November 2016) While Green Room suffers from a slight case of over-hype, it’s not a fatal one. I’d been waiting a while, like many others, for a follow-up to writer/director Jeremy Saulnier’s acclaimed Blue Ruin, and Green Room does have a lot of what made the first film so interesting: sharply observed details, a respectful look at the lower rungs of society and an often-upsetting use of realistic violence. As a punk band gets embroiled in the dirty dealings of a neo-Nazi club in the middle of nowhere, the stakes quickly get deadly as they are locked in the green room and their opponents plan what to do with them. As a genre exercise, Green Room is well accomplished: our heroes are inside, the enemies are outside and there’s no help around. Violent episodes punctuate the film, resulting in a dwindling cast and ever-more inventive story beats. It ends satisfactorily enough, even though the film doesn’t revolutionize anything. Anton Yelchin stars as the headliner of the punk band. Against him, Patrick Stewart is simply chilling as a neo-Nazi leader. Meanwhile, it’s always interesting to see Alia Shawkat have a good role for herself. Still, the star remains Saulnier, who moves his chessboard pieces with cleverness and cranks up a decent amount of suspense when it counts. Now that he has created even more anticipation for himself, what will his next movie bring? 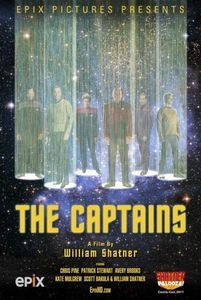 (On-demand Video, March 2012) As far as premises go, this documentary keeps it simple: William Shatner goes around interviewing the five other people who have played a captain (as lead) in a Star Trek universe.  While there’s a little bit of footage of Shatner being himself at a Star Trek convention, much of The Captains is a series of one-on-one conversations between very different actors.  Shatner seems to be enjoying himself (he wrote and directed the film), as he adds another piece to his very public voyage of self-awareness regarding his most iconic role –you’d think that after a few books, and many self-referential appearances in Trek-related works, there would be nothing left to say, but there is thanks to his interviewees.  Patrick Stewart is grace incarnate as a top-level actor who has accepted his place in Trek history, but it’s his regrets at the toll the acting life has taken on his personal relationship that ends up being his moment in this film, much as Kate Mulgrew’s extraordinary description of the rigors of a TV series lead over a single mom’s life that ends up being the film’s emotional highlight.  Otherwise, well, Avery Brooks is one weird/cool cat as he riffs off jazz music and somber themes.  There’s no denying that The Captains is for trekkers: While it’s kind of entertaining to see Shatner arm-wrestle with Chris Pine, the film remains a definite vanity project meant to develop the kind of meta-Shatneresque personae that Shatner has been enjoying for the past two decades.  Even so, it’s remarkably entertaining for those who know a bit about the Star Trek universe: discussions between fellow professionals often are.