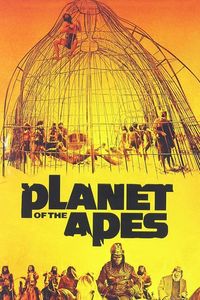 (Second viewing, On Cable TV, October 2017) The original Planet of the Apes is often used as a punchline these days (if it’s not a reference to the classic twist ending, then it’s about The Simpson’s “Doctor Zaius” musical, the increasingly bad sequels or generally anything to do with a “man in ape suits” standard for bad SF movies) and it does deserve a lot of cackling. Much of the plot mechanics are silly, the overall premise makes zero sense (not to mention anything about the sequels), the thematic messages are heavy-handed and Charlton Heston does chew heroic amounts of scenery in his performance. Still, watching the film today does have a few unexpected things going for it. It’s clearly a big-budget production for its time, something that can be seen in a rather lavish opening sequence. Heston’s character is also surprisingly cranky for a heroic protagonist, and the script does have a few odd zingers here and there. Still, even the most forgiving viewer has to acknowledge that the film has aged poorly. The goofy script (by Twilight Zone legend Rod Serling) is ham-fisted, the production values show their age and much of the film feels dull given how often it goes over familiar terrain. In fact, one thing I did not expect from watching the original film is how much better it makes the 2001 remake look—especially given how I did not particularly like the remake. And this is not even mentioning the far superior 2011–2017 reboot trilogy.