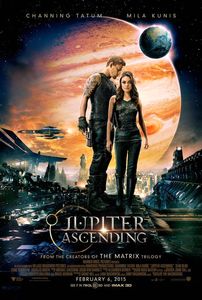 (Video on Demand, June 2015) I usually try to write my capsule reviews without references to whatever elusive “critical consensus” exists about a film.  With Jupiter Ascending, though, it’s difficult to avoid noticing that the film has earned a surprising number of scathing reviews.  I think I understand why, but even that understanding can’t take away my annoyance at what I’m seeing as an unfair critical drubbing.  To put it simply: Jupiter Ascending is a big quirky space opera and that’s such a specialized sub-genre that I’m not surprised that a lot of people would simply bounce off of it.  Not that I’m overly pleased with an umpteenth “chosen one” rags-to-riches story –even less so from the Wachowskis, who pretty much did that storyline to quasi-perfection in The Matrix.  Also not terribly cool: how wanton destruction is waved away, the caricatured characters, the brain-dead way a supposedly advanced alien society behaves, and other assorted shortcuts from reality.  (The mad-bureaucracy sequence also feels out-of-place with the rest of the film, but seeing Brazil’s Terry Gilliam at the middle of it is almost an acceptable excuse)  Strangely, it’s the weird wackiness of Jupiter Ascending that’s the best thing about it: bees domesticated by the queen of the universe, real-estate deals powering the entire plot; a dog-hybrid warrior with a gun that goes “woof!”; immortals back-stabbing each other for profit.  That’s pure far-future Science Fiction stuff, too rarely seen on the big screen.  If nothing else, I have a soft spot for such flights of fancy.  Here, the Chicago nighttime action sequence works pretty well (although I feel that it’s been over-edited, runs too long and is almost instantly trivialized come morning), and the visuals once the action moves to space are nothing short of spectacular: The Wachowksis may have trouble with plot, but their eye for spectacle remains just as effective.  Mila Kunis and Channing Tatum are unspectacular in the lead roles, but Sean Bean gets a nice turn as a character who (spoilers!) survives until the end of the film, and Eddie Redmayne gets a chance to ham it up as a spoiled aristocrat.  While Jupiter Ascending has significant holes and annoyances, it’s also a film with the advantage of its eccentricities.  I’d like to see more movies like that take chances and fall flat on their face rather that play it safe like most blockbusters today. 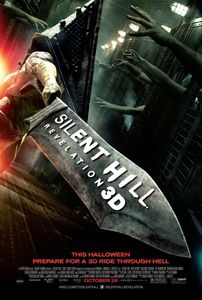 (On Cable TV, August 2013) I’m not sure anyone was asking for a Silent Hill sequel, but there it is.  And there’s just about no reason to watch it.  The plot is instantly forgettable, the mythology is borderline-incomprehensible, the scares are decidedly ordinary and the actors are merely serviceable (although it’s fun to see Sean Bean alongside Kit Harington playing a teenager outside Game of Thrones, and Adelaide Clemens really does look a lot like Michelle Williams).  What Silent Hill: Revelation does have going for it are occasionally moments of oppressive atmosphere in the tradition of the first film.  They are farther apart that could be expected, though, as about half the horror set-pieces end up feeling contrived, badly adapted from other superior films or simply more grotesque than chilling.  Otherwise, that’s pretty much it.  Sharp-eyed viewers will easily spot that the film was shot in Canada (the bilingual notices on the school-bus being a dead giveaway) but that’s really not enough to warrant a look for such a dull film. 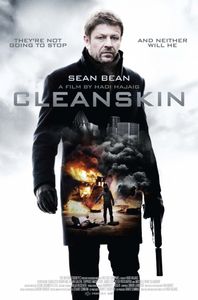 (On Cable TV, February 2013) There is a curious tension at work during Cleanskin, a British thriller opposing ideological terrorists and the special operatives chasing them down.  While the film may indulge in a series of excessively violent episodes in which covert operatives are cleared kill terrorists by any means necessary, it’s also willing to allow itself a lengthy series of flashbacks to explain how a politically-motivated student can take up terrorism as a cause.  At times, Cleanskin shows terrible mistakes by government agents before taking a late-film turn into conspiracy theories.  Does this mean that the film is complex, or merely incoherent?  There’s no right answer if viewers are willing to view the film solely as a genre exercise, where “might makes right” isn’t incompatible with vaguely leftish good sentiments.  What’s more certain is that Sean Bean turns in an efficient performance as an Afghanistan veteran pressed into service as a ruthless killer; the film gets weaker the longer it spends away from him, such as in the interminable flashback scenes explaining the life history of the lead terrorist.  (The other noteworthy performance in the film belongs to Silas Carson, who brings bone-chilling menace to a relatively minor role.)  It does seem, at time, that Cleanskin is trying to be a mean-and-lean action thriller with shoot-‘em-down villains even as it tries to bring ambiguity and complexity in a more dramatic framework.  It doesn’t entirely work if only for pacing reasons: Just as the film seems to accelerate on a thriller level, it stops dead for half an hour of dramatic background that doesn’t do much but muddy the waters.  While there is a lot to admire in the final result, there is also a bit too much in the final mix.  For a film that is so good at being without frills, the added fat just takes away from what could have been a truly better thriller.

(On Cable TV, February 2012) The fact that this ten-episode television series exists at all is remarkable: Few would have predicted that the first volume of George R.R. Martin’s sprawling epic fantasy series could have been adaptable to the screen with any degree of faithfulness –let alone become a compulsively watchable success in the process.  Featuring a credible fantasy world, continent-spanning intrigue, scores of characters, nudity, gore and complex family backstories on a TV series’ limited budget, this first season of Game of Thrones sets the stage for epic developments, keeps the essence of the book and manages to deliver a striking ten hours’ worth of entertainment in the process. Sean Bean makes for a compelling anchor as Ned Stark, a good man woefully out of his depth once thrown in the capital’s palace intrigue, but it’s Peter Dinklage who steals the show as Tyrion, perhaps the most self-aware character in a cast of a hundred.  The amount of sex and violence is such that the series could only come from HBO, as is the patience through which the story is developed.  The flip-side of such faithfulness to the 700-page book are a few pacing lulls, especially for viewer unwilling or impatient to piece together the slowly-developed back-story.  Still, the result is worth the sit.  The limits of the budget sometime show, especially in large-scale sequences, but the result on-screen still works well.  The nudity, gore and sexual content often straddle the line from gratuitous to essential: It does affirm Game of Thrones‘ more adult scope, but some sequences combine nudity with exposition in ways that may be more audacious than successful.  Still, the overall result is the beginning chapter of a fantasy series with scope and power.  I hope ratings and DVD sales will be good enough to warrant enough latter installments to do justice to the rest of Martin’s as-of-yet-uncompleted series. 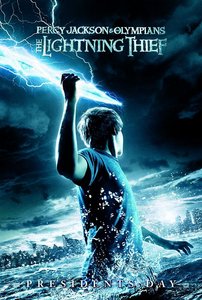 (In theatres, February 2010) The trailer for this film was unremarkable, so it’s a small surprise that the film itself proves just fine.  No in terms of plotting, which blends “kid with a fantastic origin” with “quest!” and explicitly takes on the good old plot-coupon approach to second-act plotting.  Not in terms of verisimilitude, when some of the dumbest material actually makes it on-screen in what looks like a summer camp that no one would enjoy.  No, the chief saving grace of this adaptation of the first Percy Jackson & The Olympians book is in the way it adapts Greek mythology to a modern-day context.  Part of this package are seeing a bunch of known actors in small roles: While Pierce Brosnan is OK as centaur Chiron and Sean Bean is credible as Zeus, it’s Uma Thurman as a leathery Medusa and Rosario Dawson as luscious Persephone that get all the attention.  They are barely enough to make us ignore more fundamental details about the film’s world-building, and how it doesn’t exactly hang together gracefully.  It’s a good thing that it’s Chris Columbus who directs the film, because it makes the clunky first-act plot similarities with Harry Potter easier to dismiss.  But then again, the fun of the film is in the details, not the overall plot.  A few good action sequences, complete with top-of-the-line special effects, finish off a package that is, all things considered, a bit better and more fun than anyone would have thought.