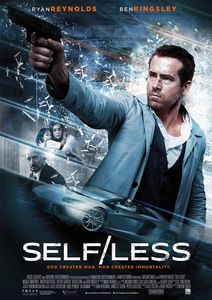 (Netflix Streaming, May 2016) If you ask written Science Fiction fans why they’re so frequently annoyed by media SF, you’re likely to get variations on a common theme: Media SF doesn’t do much with the ideas it plays with. It’s rare to see a SF movie that plays with ideas longer than the duration of a trailer: More often, the SF premise leads to an intensely familiar plot transplanted from other genres almost as-is. A representative example of this problem can be found in Self/Less, which barely has time to explain its premise (Rich old dying man transplanted in younger body, discovers that the body belonged to someone else and vows to fight those who lied to him before then exterminate him) before settling into a very familiar chase thriller. It’s not exactly a new premise (although viewers should be forgiven if they don’t remember 1966’s Seconds), but the execution’s lack of wit instantly relegates Self/Less to undistinguished bargain bin status. Too bad for Ryan Reynolds, who once again doesn’t have much of a role to play. Too bad for Ben Kingsley, who deserves better. Too bad, too for director Tarsem Singh, who delivers perhaps the blandest film of an otherwise colourful career: Aside from some memory flashes, there’s little in Self/Less to justify using a strongly visual director like Singh. The result, sadly, is almost instantly forgettable: The plot is bland, the action sequences are dull and the emotional beats are intensely predictable. For a film based on class exploitation (as in “being rich enough to buy a new body”), Self/Less doesn’t seem particularly interested in exploring them, nor anything else moderately interesting. While Self/Less is competently made, it’s also safe to the point of being featureless. No wonder SF fans often prefer turning to a good book. 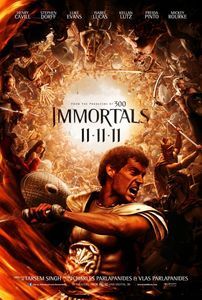 (Cable TV, September 2012) The most dependable thing about director Tarsem Singh’s work is the astonishing visual polish of his work: From The Cell to The Fall to Immortals to Mirror, Mirror, the least one can say about his work is that it’s pretty to look at.  In terms of story, though, he doesn’t always pick the best scripts: His own writing on The Fall was intriguing, but his other films are disappointing to some degree.  Immortals is no exception to the rule: While it features a number of sequences that are pretty enough to work as classical paintings, its story veers between confusion, dullness and trite clichés.  Based on Greek mythology, Immortals is partly an excuse to produce a turbo-charged fantasy action film using top-notch special effects, and partly an excuse to play in the rarefied sphere of intensely operatic sword-and-sandal drama.  It works, but not completely: While the visuals are one-wow-a-minute, the story takes a long time to get going, and even then merely works in fragments.  Henry Cavill doesn’t have anything to regret in his performance as Theseus, while Freida Pinto perfectly plays the part of a reluctant oracle and Mickey Rourke brings some energy in the picture as the villainous King Hyperion.  Still, this isn’t an actor’s film: it’s really a directorial showpiece, and Immortals has a lot of visually memorable set-pieces.  The atmosphere may feel a bit claustrophobic (at time, it seems as if half the outdoors scenes are set on a cliff overlooking the sea), but the sequences are polished to such a degree that the entire film feels photo-shopped. (Immortals may feature some of the goriest slow-motion deaths in recent fantasy, but it’s so pretty that the only response is an astonished “oooh”.) Too bad the script hasn’t been re-worked to such degree: we’re left with a dull beginning, a muddled middle and a straightforward ending.  A blend of 300 aesthetics with Clash of the Titans mythology, Immortals works best as a plot-less eye candy.  Maybe, some day, Tarsem will manage to combine his superlative visuals with a good script. 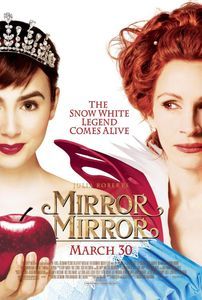 (On-demand, August 2012) What a strange film this is. Playing off the elements of the Snow White fairytale, it teeters between fantasy archetypes subversion, camp humor, beautiful visuals and oddly stilted locations.  In the hands of director Tarsem Singh, Mirror Mirror is, at the very least, beautiful to look at: Nearly every frame looks polished to perfection, and imaginative visuals are featured throughout.  There is some inventive costuming, the actors all seem to have some fun (Armie Hammer’s take on puppy-love is hilarious, while Julia Roberts seems to relish the antagonist role) and some of the funny moments are, in fact, pretty funny.  Unfortunately, the flashes of cleverness and humor are intermittent: the script seems to lurch from one mode to another without coherency, and the humor seems sprinkled randomly rather than coming from a unified approach.  (As it is, a significant portion of the gags embarrassingly fall flat.)  Mirror Mirror remains amiable throughout, but it seems to be trying a lot of things without understanding how they fit together.  For a big-budget film, it does seem to take place in a mere handful of locations.  The inclusion of modern idiom and hipper-than-thou cynicism seem particularly out of place in a fantasy setting.  Thematically, I’m not sure that the stated feminist ideals of the film are actually upheld, especially once the antagonist seems dispatched with a superfluous amount of cruelty.  Mirror Mirror’s lack of tonal unity makes it hard to really get into the groove of the film, and easier to notice its flaws.  There have been plenty of similar and far more successful takes on such material (Enchanted springs to mind) and what sets them apart is cohesion, not scattered cleverness.  [September 2012 Update: This review is a bit too harsh.  At least Mirror Mirror is better than Snow White and the Huntsman.] 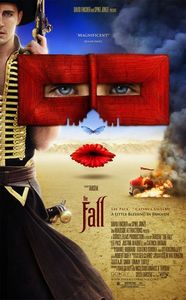 (On DVD, December 2010) Writer/Director Tarsem Singh’s first full-length directorial effort was the somewhat simplistic The Cell: great visuals, underwhelming story.  Much of the same can also be said about The Fall, which presents fantastic images from the very first moments but doesn’t quite wrap up its story as efficiently as it could have.  Balancing on the screen performance of a very young actress, The Fall tries to go back and forth between a base reality set in a 1920ish Los Angeles hospital and a globe-spanning tall tale spun by one of the characters.  Allusions go back and forth between the two realms, and The Fall’s fantasy-world climax may be unique in that it depends on the mental state of a suicidal narrator for a happy ending.  What rankles a bit about the film is the way it will teeter back and forth between finely elliptical dialogue and a dull-as-dirt repetitive exchange between protagonist and child (eg; “Are you trying to save my soul?”).  The back-and-forth between the two levels of storytelling suggest far many more opportunities than are shown on-screen.  Fortunately, there’s a lot more to The Fall than story: the film really stretches to its fullest potential in presenting the fantastic vision of an imaginary quest taking place in a landscape coming from two dozen countries.  “Visually spectacular” doesn’t quite come close to describing the splendour of the film’s visuals, not when the Taj Mahal is one of the least impressive sets…

(Second viewing, On DVD, February 2011) After looking at The Fall twice more while listening to the audio commentary, I must say that film has grown a lot on me along the way.  Many of the things that bothered me about the film’s script turn out to be the by-product of a long and complicated production history that dared balance a quasi-improvisational shooting style to accommodate a six-year-old actress for the “base reality” of the film, and an extended production schedule that spanned four years and two dozen countries for the “fantasy reality” of the rest.  Considering the film’s amazing production, the otherwise disappointing making-of documentary on the DVD is mesmerizing for what it shows to be real.  Elephants can swim, amazing buildings and landscapes truly exist and Charles Darwin can be re-imagined as a fantasy adventure protagonist.  Even though the film’s story may not fulfill its full potential, the visuals certainly do: If nothing else, it’s reason enough to have a look at the film and call The Fall one of the decade’s forgotten gems: It’s a heck of a personal vision.  The DVD audio commentaries will make you like the film even more, as director Tarsem Singh tells us about the film’s amazing production, the personal crisis that led to his ambitiously self-financed effort and the perils of working with a very young actress. 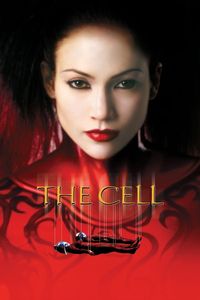 (In theaters, August 2000) I can usually forgive a lot of silly stuff if the offending film is willing to push the envelope of cinematic audacity. Certainly, the trailers to The Cell will try to tell you that you’re about to see An Event, a film which will show you things you’ve never seen before. While it is not deceptive advertising, it is at least far too enthusiastic; one of the mixed reactions I had at the end of the film has that despite the pretty pictures, The Cell wasn’t nearly as innovative, nor as strange as it wanted to become. But that’s not the most offensive thing about the film: That would be the simplistic script used to string along these pictures. Consider: Serial killer is apprehended but fails to reveal location of latest victim, police investigator interrogates killer and gets crucial clue, policeman frees victim before she dies, the end. Nowhere in this plot summary is any mention of the character played by the nominal “star” of the film, Jennifer Lopez. That’s because she may be incredibly hot, but her character does absolutely nothing to solve the case, save get captured and require rescue by the policeman. Ouch! Fortunately, there are still a few pretty pictures to look at thanks to director Tarsem Singh’s passion for visuals. But they’re not enough.