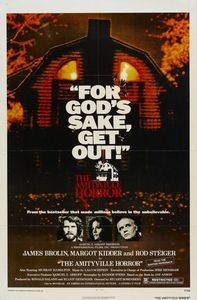 (On Cable TV, July 2017) Not all haunted house movies are created equal, and despite The Amityville Horror’s reputation, it ranks toward the low end of the scale. Part of it has to do with its familiarity: The haunted-house story has become a cliché at this point, and The Amityville Horror doesn’t renew much along the way, what with its hallucinations, Catholic curses, familiar plot points (save the dog!) and rather long duration time. James Brolin, Margot Kidder and Rod Steiger all do good work, but the subject matter is just tired—even more so if you’re not inclined to give any credence to the “based on real events” claim that surrounds the film. A few period details are intriguing (such as the acceptance of the paranormal by a supporting character) but much of it just feels dull, and some of the most promising material (the black ooze, for instance) don’t seem to pay off meaningfully. I used to think that the 2005 remake wasn’t very good, but it turns out that the original isn’t really good either.