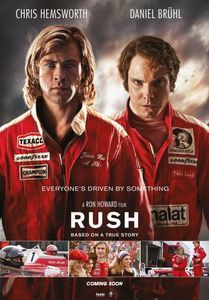 (On Cable TV, August 2014)  Given the speed and excitement of Formula 1 racing, it’s a wonder that there aren’t more movies about the sport.  Considering Rush, though, the wait has been worth it: Easily eclipsing 2001’s Driven, this historical bio-drama has everything we’d wish for in a racing film, and strong historical accuracy as a bonus.  Centered around the 1976 Formula 1 season in which British racer Daniel Hunt competed against Austrian legend Nikki Lauda, Rush is an actor’s showcase, a convincing period recreation, a virtuoso blend of special effects and crackling good drama.  Expertly directed by Ron Howard, it’s gripping from the very first moments, pitting a charismatic playboy and a valorous technician against each other.  Howard’s direction doesn’t stay still for long, and does a fine job at summarizing an eventful season’s worth of incidents into a striking whole.  The atmosphere of the high-flying 1970s Formula 1 circuit is impressively conveyed, including impressive race sequences with period cars. (Was is done with CGI or practical?  It doesn’t matter when the film is that good.)  Much of Rush‘s effectiveness boils down to its two lead actors: Chris Hemsworth makes full use of his charisma as the seductive Hunt, his brashness clashing against the methodical Lauda very well-played by Daniel Bruhl.  The two make for compelling rivals, and Rush makes maximum use of their conflict in allowing us a peek into the mind of top-notch race drivers.  As exciting for its dialogue scenes than for its racing action, Rush may not look like much on paper, but becomes steadily engrossing without any effort from the viewer.