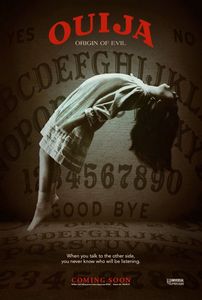 (On Cable TV, July 2017) The first Ouija movie came and went so fast that I never bothered to see it, not encouraged by the terrible reviews it got along the way. So when Ouija: Origin of Evil started getting decent reviews I was intrigued, and it became a must-see when I realized that writer/director Mike Flanagan was behind it: Flanagan’s movies aren’t perfect, but they’re consistently more interesting than the average horror film. This Ouija prequel is no exception: For a while, it’s The Conjuring-level good and while the sequel-dictated conclusion does it no favour, it does manage a few effective scares along the way. The start is very promising, what with its vintage sixties iconography (down to the old-school Universal logo and title card), but especially the introduction of a likable family of a woman and two girls doing what they can to get by despite a dead husband/father. Their spiritism sessions are hokum, but they truly want to help people get better. Elizabeth Reaser is striking at the matriarch, while Lulu Wilson and especially Annalise Basso make impressions as the daughters. Alas, the introduction of a Ouija board soon threatens their lives, as demonic possessions rival with the growing realization that they’re inhabiting a haunted house to take the pep out of their days. Plot-wise, those two elements do conflict, but on a scare-per-scare basis, Ouija: Origin of Evil manages to have good moments. My disappointment with the movie grew bigger as I realized that this wasn’t going to be a comforting horror story reinforcing the family unit, but a demolition derby in which any one of the sympathetic characters would be lucky to make it out alive and sane. (I suspect that much of this conclusion is preordained by the requirements to feed into the previous film.) As I grow older, I have less and less patience with horror movies that run out of characters to kill, and so I find myself unable to like this Ouija follow-up: It’s simply too mean to its characters after such a promising start, and that’s an issue that I share with Flanagan’s Oculus as well. A more optimistic conclusion would have allowed the film to be more accessible to non-horror audiences, but that’s not what we get here. Oh well; at least it’s a competent effort.