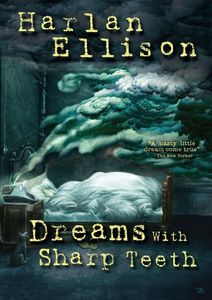 (On DVD, December 2010) Few contemporary writers elicit a variety of reactions like Harlan Ellison.  With his substantial body of work, long personal history and contentious personality, Ellison can be admired and reviled, often by the same people at various times.  Famously cranky, extremely intelligent, extraordinarily outspoken and connected to a variety of subcultures from Science Fiction fandom to Hollywood professionals, Ellison is an ideal subject for a documentary and Dreams with Sharp Teeth, twenty-five years in the making, is meant to offer an overview of the man and his career.  A compilation of archival footage, interviews with Ellison, readings, testimonies from friends such as Josh Olson and Robin Williams and a minimal amount of on-screen captions for context, Dream With Sharp Teeth is not an objective view of its subject: director Erik Nelson is too much of a fan to seriously question the Ellison mythos (although he lets Neil Gaiman come closest to an objective assessment by leaving a reference to Ellison’s career as performance art) and the film is substantially stacked in Ellison’s favour.  People familiar with the Science-Fiction field will delight in spotting appearances by Dan Simmons, Connie Willis (!), Michael Cassutt and Ronald D. Moore.  (Those same SF fans may quibble with how Ellison’s troubled relation with fandom is illustrated by his presence at the 2006 Nebula weekend: The Nebulas are a professionals’ event; couldn’t Nelson go to the fannish 2006 L.A. Worldcon instead?)   But the star remains Ellison… in all of his overblown personality, important friends, nice house and tortured history with Hollywood and the SF&F field.  Is it an interesting documentary?  Sure.  Is it the best possible documentary about Ellison?  Heck no –but documentaries being works of passion, it would be unlikely to see one made by someone who wouldn’t already be a fan of Ellison.  There are so many fascinating things that could be discussed about Ellison dispassionately, but for that, we will probably have to wait for an unauthorized biography.  In the meantime, Ellison fans and SF readers will be happy with the film as-is.  The DVD comes with a set of generally superfluous readings, but also an overview of the film’s premiere (with unlikely guests such as Werner Herzog and Drew McWeeny) and a curiously interesting pizza chat between Ellison and Gaiman, in which Ellison isn’t being Ellison (much) and in which, if you know what to listen for, you can even hear a reaction to Ellison’s 2006 L.A. Con IV fiasco.  As SF fans with poisonously long memories (or even a look at Ellison’s Wikipedia page) will tell you, Dreams with Sharp Teeth only tells a chunk of the full Ellison story –which can’t be solely told by his friends.

The friendship between SF legends Harlan Ellison and the late Isaac Asimov is well known. But despite being good friends, the two had never collaborated directly on a book.

Until I, Robot: The Illustrated Screenplay (IRTIS), that is. As related in Ellison’s foreword, Asimov had received numerous offers to put the material contained in I, Robot to the big screen. All offers were less than satisfactory: The anthology format suggested by a collection of short stories isn’t a big favourite of movie-going audiences.

Enters Ellison, who writes a script combining fours short stories by Asimov into a script inspired in part by nothing else than “Citizen Kane”.

Simply put, a journalist decides to investigate famous robot designer Susan Calvin. Who is she? Why was she at the president’s funeral? The journalist has to visit several person before he happens on the truth, a truth that is as unsettling as it is satisfying…

The script, written in the seventies, has gathered dust on Warner’s shelves ever since.

Now, everyone can read the result of the collaboration, illustrated by the exceptional art of Mark Zug.

The result, simply put, fully lives up to its reputation of “the best Science-Fiction film never made”

The script displays an uncanny fusion of Asimov’s Hard-SF ideas with Ellison’s usual flair in characterisation and literary qualities. For those of you who haven’t always been able to stomach Asimov’s usually dry prose and Ellison’s sometimes incomprehensible works will find here an unusually readable script.

What impressed me the most about this script is that in addition of writing a story with great, sheer soul, Ellison has fulfilled the primary requirement of visual SF: Making us visit strange, impressive, real places. He doesn’t make the usual clichéed choices: Instead of making two people meet in a bar, he puts them in an arcology, etc… This might not sound like much put this way, but it’s handled superbly in the book.

Of course, a good part of the credit for the visualisation of the script goes to Mark Zug, who has drawn/painted for this volume a series of absolutely beautiful work of arts. These add considerably to the worth of the book. In fact, the greatest compliment I can think of is a criticism: There aren’t nearly enough of them!

In his introduction, Ellison states that the reader will be the judge of whether this would make a good movie. Well, for me at least, the verdict is clear: Yes. I’d pay without asking for an I, Robot ticket. In these times of insipid remakes of even more insipid past SF movies, I, Robot comes out as a contender with brains, looks and class.

Definitely recommended reading for Asimov and Ellison fans, as well as everyone in between. This isn’t like sitting in the theater, but it’s the best thing we’re likely to get…