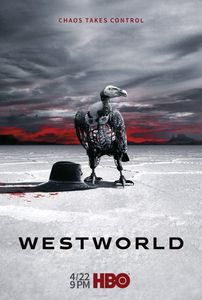 (On Cable TV, June 2018) The problem with second seasons of high-concept shows is that you don’t quite have the same element of surprise in reserve. In Westworld’s case, it means that the dizzying timeline tricks and character revelations of the first seasons can’t be exactly reproduced, and that the show has to work within known parameters. This doesn’t necessarily mean that they don’t try to keep things interesting. Set in the few days immediately after Season 1, this second series follows characters as they react to the events of the first season, revealing new secrets along the way and digging even deeper in mind-twisting questions about personalities and predetermination. Thanks to the endless wonders of flashbacks, simulations and body/mind separation, nearly the entire cast is back (yes, even those confirmed dead), meaning that the solid acting talents of the series are once more on display. Tessa Thompson gets a deservedly more prominent role, while Ed Harris, Thandie Newton and Rachel Lee Evans all keep on doing what they did so well the first time around. While I was initially disappointed by the series’ renewed focus on the park (I expected the hosts to escape in-between seasons), the park’s uncovered secrets made things even more interesting. And while this second season is straightforward about its dual-timeline structure, it does experiment with storytelling in focusing certain episodes on specific characters (some of them peripherals) and taking trips in other theme park areas to hilarious parallel effect. My pick for most-improved character goes to Lee Sizemore, formerly an annoying writer here transformed into the incarnation of everything he wished for (including a late empathy boost for his own creations) in a neat commentary on the relationship between creator and characters. Meanwhile, the season’s best episodes (setting aside the season finale that features so many character deaths that it feels obliged to have a few resurrections as well) has to be the eighth, in which a relatively unsophisticated character discovers the true nature of his world in a mostly self-contained episode that spans decades of series history. There is, once again, a lot of material to digest in Westworld—the storytelling is challenging, the themes are explored to the point of pretentiousness, and the science-fiction devices used in generally compelling fashion. It all amounts to solid TV—worth following as it airs, episode after episode.

(On Cable TV, October 2017) Early word on Westworld was not good. Hyped by HBO as their next big-budget SF&F show now that Game of Thrones is on its way out, the show suffered ominous-sounding production delays while scripts were re-tuned, which didn’t bode well in the wake of Vinyl’s failure. But while this first season definitely has its issues, the result occasionally reaches delirious peaks of peak TV goodness, playing with savvy audience expectations and delivering reality-altering perceptional shift. While the show begins and more or less ends where Michael Crichton’s original 1973 movie did, there’s a lot of complexity under the surface, and the attitudinal shifts in the show’s sympathies for artificial humans is notable. In-between Inception and Memento, show-runner Jonathan Nolan is known for mind-warping scripts and Westworld is occasionally no different: the first episode is a fantastically twisted introduction to a familiar concept, while the end-stretch of the series delivers solid revelations about the nature of some characters, narrative time-play and unexpectedly philosophical rambling. It’s hardly perfect: much of the stretch between episodes 2 and 6 could have been compressed in half the time, while the so-called deep thoughts of the conclusion feel both ponderous and nonsensical. But when Westworld works, it really works. Episodes 1, 7 and 10 alone are worth the long stretches in-between. Top-notch actors such as Ed Harris, Anthony Hopkins, Jeffrey Wright and Thandie Newton deliver good performances, the script cleverly plays to an audience that demands more from their TV miniseries and the visual polish of the result can be astonishing. Even the most pretentious aspects of the script can be seen as a plus given how high it aims. The sympathy of the series for its synthetic characters is a notable representation of the maturing of media Science Fiction—especially when humans act this rotten, can we really blame the robots for turning on their masters? I’m not sure where season 2 can take us, but as far as HBO is concerned, it’s mission accomplished for Westworld—expectations run high for the follow-up.