(Netflix Streaming, June 2016) I wasn’t expecting much from Australian thriller Son of a Gun, but it does get steadily better as it goes on. Featuring Ewan MacGregor and Alicia Viklander, this film starts as a prison thriller, but gradually becomes more interesting as the characters get out of prison, execute their Big Heist and then have to live with the aftermath. Brenton Thwaites has the central role as a young man who is transformed by prison, becomes the confidante of a veteran criminal and tries to forge his own happy conclusion from between far more powerful villains. While the limits of the film’s budget are obvious, the script gets more interesting as it goes along, and the film’s west-Australia setting makes for an interesting change of pace. There isn’t much more to say about Son of a Gun—at best, it’s a quiet surprise for those who aren’t expecting much more.

(Video on Demand, March 2016) 2015 was the year when transgender issues hit the mainstream like never before, but it’s not clear whether this helped or hindered The Danish Girl. Reportedly a very fictionalized account of the first clinically transgendered person, this is also a recognizable piece of Oscar-courting filmmaking, complete with credible historical recreations, flawed but heroic characters, progressive social issues and a self-important tone. It seeks legitimacy through art, blurs the messy inconvenient details of its inspiration and wraps up everything with a sad bow. It usually works: director Tom Hooper is, by now, a veteran at this sort of thing, and effortlessly moves through period sets, and Eddie Redmayne does turn in a showy but compelling performance as a man becoming a woman—although Alicia Viklander is just as interesting as the character who reacts to the transition. The historical atmosphere of the early-twentieth-century European art scene is well executed and the drama goes slightly beyond what we’d expect from the film’s slug-line. The Danish Girl is, in short, a bit more interesting than expected, helping it avoid feeling like it’s exploiting the issue-of-the-moment. It could have been better: At times, the cinematography feels overly staid, feeling like a series of isolated room dramas rather than presenting its world with the bustling energy suggested at the edges. It’s also a film condemned by facts to a rather conventional dramatic arc—comforting given the touchy subject matter, but no less predictable. For all the sympathies we can have for the character’s plight, it’s also locked into the filmmaking template proper to those kinds of movies. 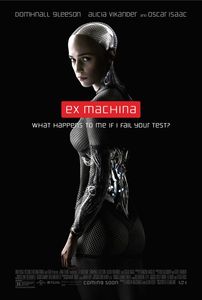 (Netflix Streaming, October 2015)  Many recent science-fiction movies are probing the uncomfortable notion of humans being replaced by their creations, but few have the nerve to do so as deviously as Ex Machina does.  At first, it seems like a familiar kind of film: A young man is brought in to a remote location to administer a Turing Test to a freshly-developed Artificial Intelligence.  What could go wrong?  Oh, we know the answer to that question.  But Ex Machina goes there through unexpected paths: It stacks the deck against its lovelorn examiners by featuring a robot optimized for sex-appeal, bypassing higher cognitive functions by going straight for base instincts.  (Much as I loathe to admit any robosexual fetishes to the world at large, Alicia Vikander is here far more attractive as a visibly artificial character than when she dons a dress and wig to pass as human.)  Oscar Isaac turns in another terrific performance as a mad genius combining technical skills with in-your-face arrogance.  (The dance sequence alone is instantly memorable)  Domhnall Gleeson is just as effective as the audience stand-in, a young man who doesn’t even realise the extent to which he’s being manipulated.  But the mastermind here is writer/director Alex Garland, who direct a great first film from his own tight and mean script.  There’s a deceptive simplicity to Ex Machina’s surface that hides a lot of philosophical allusions, well-explored ideas and contemporary fears.  The result maximizes its secluded location and small cast to present a great science-fiction film, unnerving from beginning to end and very successful in what it manages to achieve.  It’s a surprisingly raw treatment for a cerebral subject, and it’s a sure-footed modern classic about a well-worn SF trope.