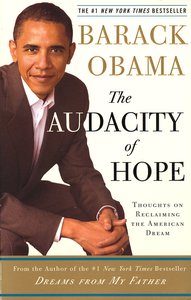 Well before he was nationally known as a rising star in US national politics, Barack Obama impressed a number of readers with Dreams From My Father (1994), a memoir dealing with race, a complex multi-cultural upbringing and a son’s quest to learn more an absent father.  Well-written and having little to do with politics, Obama’s first book was rediscovered a decade later as Obama became an increasingly familiar face on the evening news.  It was followed in 2006 by The Audacity of Hope, a frankly more political book written in-between Obama’s accession to the US Senate and his successful presidential campaign.

While Dreams From my Father was generally apolitical (although not entirely so, given how Obama was already eyeing a career in politics in 1994), The Audacity of Hope is a different beast.  It’s more easily classified as “pre-electoral”, those books by politicians that pop up whenever they’re thinking about running for high office.  Those books are usually a mixture of political autobiography and vague political program, carefully designed to be read by a literate electorate hungry to learn more about their chosen one.  You can run down the list of nearly every presidential candidate in recent memory to find one of those, usually with subtitles such as “A plan for a new America”.

This doesn’t necessarily make The Audacity of Hope a bad or calculating piece of work.  It does however place it under very different standards than his first book.  It makes it easier to read as a clue to understand what’s going on in the head of now-president Obama.  It also makes chunks of his books practically irrelevant to non-US audiences.

Let’s tackle the dullest part of the book first: the vague political program.  In pre-electoral books, those are the parts where the candidate demonstrates his keen understanding of America’s problems and then proposes a number of solutions, designed for wide popular appeal, in order to resolve said problems.  Expect paragraphs of statistics mixed with campaign trail anecdotes illustrating key concepts.  Expect a lot of expensive platitudes such as “more/better defence”, “more/better education” and “lower/better taxes”.  Expect an appeal to new ways of doing politics, away from the current partisan divide.  The Audacity of Hope certainly meets those expectations, as we get a glimpse of Obama’s early platform, untainted by brutal contact with political and fiscal realities.  For non-US audiences, those aren’t the most gripping segments of the book: issues such as racism, for instance, as so specific to the US that strategies to deal with them are alien even in countries as close to the US as Canada.

Fortunately, there’s more than simply a policy program in The Audacity of Hope.  The most compelling sections of the book are those in which Obama-the-man reflects on his life, his political experience and his early days in federal politics.  Those are the sections in which we learn about his life, his family, what he has learned as a politician so far and what he fears as he sees the rest of his political career in front of him.  Here is where we get to read about his fears about becoming less of a member of the population he’s meant to serve, and more of a professional politician embedded in the traditions of his office.  In-between a too-short account of his romance with Michelle and the affection he has for his daughters, Obama projects the image of a very intelligent man who understands the trade-offs that will be required of him as a politician.

It also confirms what many people have been suspecting about him despite the “Change” rhetoric: Obama may run on the image of a populist, but he’s a far more intelligent, nuanced and careful politician.  Everything we’ve seen in the 11 months since his inauguration fits his book more than his campaign promises: Obama has an uncanny ability to acknowledge problematic issues in ways to make fans claim “Wow, he gets it”, but his willingness to take action will be calculated to the most minute political consequence.  It actually makes him a far better politician than the alternative (despite partisan cries, politics is really a game of incremental inches: Obama will accomplish a lot more as a careful tactician than a firebrand populist) and reading the book’s passages on the tradeoffs required of professional politicians is a reminder that it’s a deliberate choice.

So, no, The Audacity of Hope isn’t quite the soaring, lyrical work that Dreams From my Father was.  Nor is it entirely interesting and compelling.  But once you dispose of the pre-electoral fluff and focus on the rest, it’s actually a pretty handy book to understand Obama-the-President.  Which isn’t too bad, as pre-electoral books go.

Sometimes, the most important part of a book isn’t the text.

So it is that the most vital line of Barack Obama’s Dreams From My Father is found on the back cover of the 63rd printing of the book’s revised paperback edition: “Barack Obama was elected President of the United States on November 4, 2008.” Much to the dismay of the author who, in 1994, promoted his autobiography-so-far as an original contribution to the ongoing American racial debate, most people will read the book knowing much about the author as a career politician.

Written in the early nineties, Dreams From My Father predates Obama’s formal political career and, as such, offers a very different type of memoir than you would expect from a politician. It’s essentially a narrative of a young bi-racial man as he tries to navigate the shoals of America’s racial identity issues. From a very unusual background (white American mother; black Kenyan father; born in Hawaii before being raised in Indonesia; then back to studies in Hawaii, Los Angeles, New York and Chicago), young Barack Obama ends up trying and rejecting various ways of thinking about himself: He learns racism, rejects black nationalism, meets people of all kinds of backgrounds and tries to come to grip with the absence of a father in his life. The book leads almost inevitably to a defining visit to Kenya, where he comes to learns about his father’s true history and where that leaves him as a person.

Dreams From My Father is written as a personal narrative that incorporates elements of fiction-writing: dialogues are recreated, scenes are pieced together, composite characters are meant to represent various ideologies, and so on: It’s a surprisingly readable book, and if the language can become occasionally florid, it’s a book that people will read while hearing Obama’s voice. (Sometimes literally so, as the audio book of the book -occasional profanities and all- was read by Obama himself… and netted him the first of his two Grammies.) After eight years of a president who barely appeared literate, it’s a bit of a shock to find out that an actual author (and a pretty good one at that, even allowing for the possibility of editorial assistance) is actually now sitting in the While House.

But my ideological colors are showing. It’s still a bit of a shock, though, to read a long passage about social inequity, about how black/white divisions can be a distraction from class issues, and realize that this contentious community organizer, this careful, conflicted young man (having outgrown early drug experiences –yes, he does talk about how “Pot had helped, and booze; maybe a little blow when you could afford it.” [P.93]) is now sitting in the White House, shaped by his experiences and ready to apply his best judgment to the crises confronting the nation. It almost enough to warm the heart of even the most comfortable cynics, although those same cynics may have trouble reading the weepy grave-sweeping epiphany that serves as the book’s conclusion.

Because, no matter what the author may have intended in 1994, we are reading this book to get clues about the current president: where he comes from, what experiences had an impact on him, and how he’s likely to react from this depth of knowledge. Modern readings of Dreams From my Father turn the book’s initial goal inside-out: We’re not reading about an unknown author considering overarching issues, but reading about a specific person’s thoughts on those specific issues. Some Obama fans are bound to be disappointed at the book’s early genesis (Michelle barely makes an appearance in the book’s closing pages, and we get almost no glimpse of Obama’s post-law school experiences), but that’s the nature of the first tome in any autobiography. The follow-up volume, The Audacity of Hope, has been out since 2004… and no matter what happens, Tome 3 and beyond are being experienced right now. They’ll make fascinating reading.